Erythritol: A healthy sugar substitute or yet another marketing ploy? 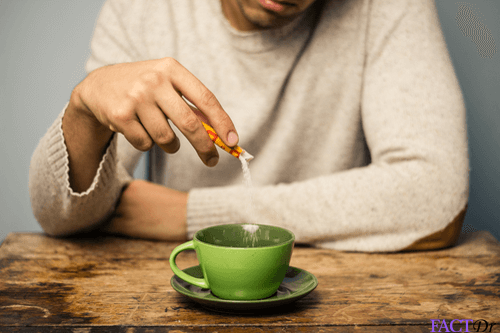 Home » Nutrition » General » Erythritol: A healthy sugar substitute or yet another marketing ploy?

Sugar and the modern diet

A modern sedentary lifestyle and hectic work life are majorly accused of causing lifestyle disorders. Increasing occurrence of lifestyle disorders amongst the working population has reached to an alarming stage all around the globe. Rising health-related concerns amongst the global population have compelled a significant portion of the global population to evaluate their dietary habits and eating patterns. In order to overcome prevalent health problems, people are spending a lot of time and making an attempt to choose their food wisely. Out of all the dietary components, sugar is criticized most and is infamous for causing a broad range of diseases.

Sugar is highly palatable due to which people find it very difficult to replace it or remove it from their regular diet. However, with research advancements in the food industry, alternatives to traditional sugar have been discovered and gaining popularity across the globe. Alternatives of sugar are categorized into natural as well as artificial sweeteners, depending on their source of production. Natural as well as synthetic sweeteners both have their pros and cons which cannot be neglected.

Erythritol was founded in 1848 by John Stenhouse a Scotland based chemist. Since the 1990s, food & beverage industry in Japan had been using this sweetener in a wide range of products such as yogurt, candies, jams, jellies, chocolates, and beverages. In 1997, the Food and Drug Administration authority declared it a safe substitute of sugar to be used in the food & beverage industry. Currently, the use of erythritol is very popular in the food processing industry of the United States. It can be used in powdered or granulated form. 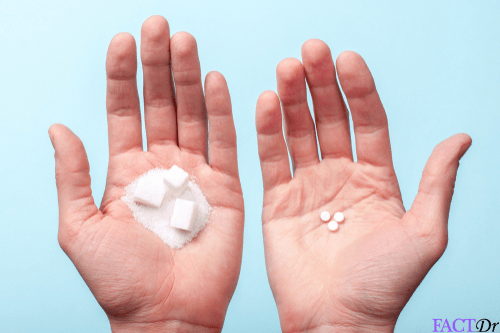 Erythritol is relatively a new entry in sugar substitute market; it is a low-calorie substitute of sugar used for sweetening of sugar-free or low sugar edible items. Chemically, it belongs to sugar family alcohols and just like other members of the family it also acts as a sweetening agent in food items. It can be derived from the fermentation of natural sugar which is present in fruits with high sugar content. However, the variant of erythritol which is majorly used by food & beverage industry is manufactured by fermentation of genetically modified corn or wheat starch. It is also famous as low glycemic index sweetener and highly used by people following a low carb, low calorie, and ketogenic diet.

Erythritol has 6% calories as compared to sugar and has a whopping 70% sweetness of original sweetness.

Is Erythritol Natural or Ultra Processed?

Erythritol is naturally present in juices of few fresh or fermented fruits such as melons, pears, grapes, etc. However, readily commercially available erythritol is derived from genetically modified corn and wheat starch; this makes it an ultra-processed sweetener. Majorly man-made erythritol is produced with yeast-based fermentation of genetically modified starch. Moniliella pollinis is a species of yeast that is used in fermentation-based manufacturing of erythritol.

Very rarely, his sweetener is also made with birch plant; however, it is expensive and not preferred by majority users. Nevertheless, there are very few companies that are making this sweetener with non-genetically modified sources, this variant is relatively healthier than conventional erythritol.

Is Erythritol Healthy for regular intake? 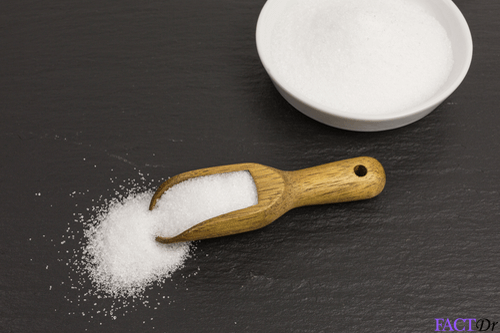 Substitution of sugar with erythritol is preferred by weight waters, diabetic, pre-diabetic and health-conscious population as it has a wide range of advantages. It has the capability to add sweetness to food items without increasing its calorific value.

Several studies conducted taking human participants validated that consumption of erythritol does not increase levels of glucose or insulin in the human body. In addition to this, this sweetener does not tamper with the level, metabolization or functioning of essential fatty acids, cholesterol or triacylglycerol. Well maintained level glucose in the blood decreases chances of fat deposition and risks of various lifestyle disorders, therefore, it is considered an evident healthier alternative of sugar.

Impact of Erythritol on Human Heart

This sweetener is considered potentially rich in antioxidants and has the ability to diminish the damage caused by the release of free radicals during metabolic processes. Several research studies conducted on diabetic rats demonstrated that the rich concentration of anti-oxidant in erythritol can potentially provide protection against damage caused to blood vessels.

It is particularly effective in controlling hyperglycemic blood condition which in turn is capable of improving the functioning of blood vessels. According to a research study regular consumption of 36 gm of erythritol by diabetic individuals for a month, improved their blood vessel functioning and maintained glucose at a healthy level. As a result, this sweetener proved its efficiency in reducing the risk of heart diseases in human.

Unlike conventional sugar, consumption of erythritol prevents tooth damage. Harmful species of bacteria which is present in mouth is responsible for tooth decay. These teeth damaging bacteria majorly feed on sugar particles grow and cause tooth decay. On the contradiction, the advantage of the intake of erythritol is that harmful oral bacteria are incapable of metabolizing this sweetener. Therefore, chances of cavities with erythritol users minimize to a great extent.

A boon for lifestyle disorder patients

In addition to diabetes, there are many lifestyle disorders which require regular monitoring of glucose level in the human body as a part of treatment. For example, majorly PCOD patients suffer from insulin resistance and find difficult to control weight, this disorder is also called sister diabetes and requires control on sugar intake. Substitution of regular sugar with this low-calorie sweetener can help these lifestyle disorder patients in keeping fluctuating glucose level within a healthy range.

The unique chemical composition of erythritol makes it indigestible for the human body and it passes through the digestive tract with negligible breakdown. Post consumption, this sugar alcohol is absorbed in the small intestine and circulates through the bloodstream without spiking glucose level.

Then it reaches to the colon, the bacteria present in colon ferments this sugar alcohol. As a result of which 90% of erythritol is excreted out in urine whereas the rest 10% produce gas a by-product on being fermented by colon-bacteria. This whole process causes gastrointestinal distress in the human digestive system. However, it does not cause any laxative effect on consumer’s digestive system. In people with weak digestive system excess consumption of this sweetener can cause diarrhea, flatulence, and nausea.

GMO based Erythritol Production is a Potential Harm

The consumption of genetically modified crops by the human population has always been questionable. Although erythritol can be derived from a non-GM crop, the manufacturers prefer to make it with GM crops as it gives better yield at an economical cost of production. For a long period, the consumption of GM foodgrains is linked with various health problems such as a weak immune system, food-related allergies, infertility, and unregulated insulin level. Eventually, it is considered that long term intake of products that are manufactured with GM crops can potentially cause health problems.

Don’t Mix it with other Sugar Substitutes

It contains 60% to 80% sweetness of natural sugar depending on the plant source used for its production. In order to increase its sweetness, few companies mix this sweetener with other sugar substitutes and sell in the market. The consumption of this concoction can cause health problems to the users. For example, erythritol is mixed with aspartame and sold in the market; this dangerous mix is capable of causing anxiety, depression, fatigue and various similar problems to the consumers.

Erythritol vs. other Sweeteners

The leaves of the Stevia plant are being used as a natural sweetener over a long period of time. Stevia originally belonged to South America. Stevia-derived sugar additives are manufactured from substance present in Stevia plant known as rebaudioside A. In terms of calories, Stevia is a better sugar alternative as erythritol is a low-calorie sweetener whereas Stevia is a zero calorie sweetener.

Stevia-based sugar products require very less processing which makes it more natural as compared to its competitor products. The consumption of sugar alcohols such as xylitol and erythritol can potentially have higher health risk as compared to Stevia. The only downside linked with the usage of Stevia is that it can’t be directly added into recipes without making adjustments as Stevia is approximately 200 times sweeter than natural sugar. Moreover, it has a strong after taste which is quite similar to licorice.

Unlike erythritol, xylitol is manufactured from a wide range of plant sources. In addition to plant sources, xylitol is also commercially produced from micro-organisms such as bacteria, fungi, and yeast. The chemical composition of xylitol and erythritol is quite similar due to which they are metabolized in the human body in a similar manner. Furthermore, the potential health problems caused by excess intake of these sugar alternatives are also the same.

However, xylitol gets little extra points as it is more eco-friendly not manufactured from genetically modified crops and is also low-cost sugar alternative. Nevertheless, xylitol is also not a perfectly healthy sugar substitute; in terms of the glycemic index value is way higher than erythritol. Glycemic index (GI) value of xylitol is 13 whereas the GI value for erythritol is 0. 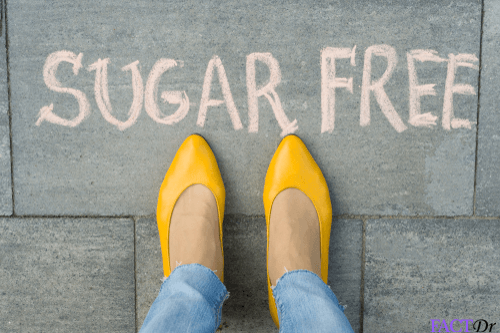 Erythritol is healthier than sugar; however, it ranked far below in healthfulness when compared to raw honey and monk fruit. From centuries, raw honey is considered a treasure of health benefits. Raw honey has amazing nutritional value and healing power. Studies have provided evidence that the regular consumption of raw honey helps in boosting immunity against a wide range of allergies, it also treats cough and sleep problems.

Similarly, monk fruit can be used as a natural sweetener as it is approximately 300 times sweeter than cane-derived sugar. In addition to this, this product doesn’t spike blood glucose level when ingested. In terms of healthfulness, no sugar alternative can beat the health benefits provided by honey and monk fruit. The restraining factors that limit the usability of natural sugar sources are: after taste, flavor, and inability to use the wide range of food items.

The Biggest Question: To Use or Not To Use Erythritol?

Erythritol as a sugar substitute is a well-balanced mix of negatives and positives. The fact that it is majorly produced by using GM crops raw material brings a lot of negativity in the mind of users. However, its ability to control weight and maintain fluctuating sugar level, due to low calorific value and zero glycemic index are key factors that are driving the demand for erythritol across the global health & fitness industry.

So far, erythritol has not been accused of causing any kind of severe toxicity in human which has also increased its usage globally. In addition to this, erythritol can be directly used in recipes without making any changes as it doesn’t have any after taste or problem of excess sweetness. In order to avoid any kind of negative health effects, FDA has estimated that consumption of erythritol should not exceed 13 grams per day.