Serotonin: What you didn’t know about this “feel-good” chemical 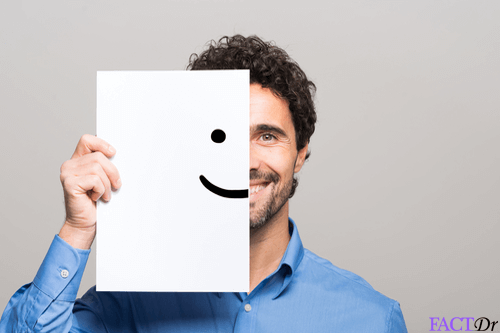 Home » Mental well-being » Serotonin: What you didn’t know about this “feel-good” chemical

Neurotransmitters 101: An introduction to the inner workings of the human brain

The human brain is an infinitely complex entity, guarded by the tough exteriors of the skull.

It has billions of neurons (a hundred billion to be precise, that’s 1 followed by 11 zeros ! )  or nerve cells that work collaboratively by establishing an extremely intricate mesh of network that is responsible for every single physiological and psychological activity – starting from breathing, to digestion, to memory and emotions.

When you actively imagine this colossal array of neurons working coherently with each other, passing on electric impulses to one another, you would obviously think that they are somewhat interconnected or intertwined with each other.

However, as bizarre as it may sound (like the many other mind-blowing facts about the brain), these neurons are not in physical contact with each other per se.

They are merely in close proximity to each other without the any of them even remotely touching each other.

So how on earth do they propagate signals? 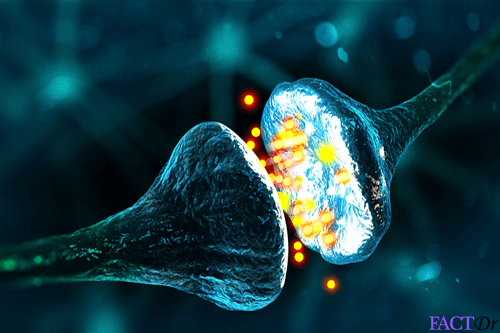 This critical function is carried out by what scientists call as neurotransmitters.

To be put it in strict neurological terms, a neurotransmitter is a chemical messenger that aids in propagating, boosting, or balancing the electrical signals between the neurons primarily. These are involved in transmitting signals between other body cells as well.

Since the neurons are not in physical contact with each, these chemical messengers have to cross the microscopic space between the neurons (called as synapses) to be able to propagate electric signal. This process is known as neurotransmission.

So how this exactly happens is that when a particular electric signal reaches the end of a nerve cell (the nerve cell’s structure resembles that of a long chain), it initiates the release of these chemical messengers or neurotransmitters.

And this is how every single bodily function in your body is made possible.

Neurotransmission is the key process that dictates survival – respiration, digestion, cognition, movement, excretion – every bodily process is governed by these minuscule yet significantly critical synaptic movements.

There are various types of neurotransmitters present in the human body, each corresponding to a specific or a set of specific functions they are responsible for.

You have acetylcholine (the most studied and well-understood neurotransmitter of all) that regulates muscular contractions and the autonomic nervous system (the system controlling all the involuntary actions within your body such as the pumping action of your heart and breathing).

You have dopamine – perhaps the most interesting and deceptive neurotransmitter of all.

This tricky messenger is linked directly to our brain’s reward center and hence plays a major role in both positive and negative associations formed by our brain.

Be it the cataclysmic addiction to hazardous substances such as nicotine and marijuana and the proclivity to gambling or pornography or be it the positive motivation to work towards your goals – both the yin and the yang of human emotions are in control within this chemical messenger.

However, in this article, we are going to discuss in depth about a specific neurotransmitter that has a holistic control over both the biological and the psychological domain of the human body.

A simple chemical that has the power to vacillate your moods, impact your immune system, govern how much sleep you get, and even spawn suicidal tendencies in many.

The name is serotonin.

Discovered in the 1930s by Vittorio Erspamer and later christened as “serotonin” in 1948 by Irvine Page (since it was found in the blood serum hence “serum-tonic”), serotonin is a neurotransmitter that is found in 3 regions – the central nervous system, the GI tract, and the blood platelets.

It also goes by the chemical name 5-hydroxytryptamine or 5-HT. It is derived from tryptophan, an essential amino acid.

It is not only found in the bodies of mammals but also certain worms and insects, and plants and fungi. Its presence has been detected in several insects’ venoms as well.

While most of you might be aware that serotonin (or rather the lack of it) and depression are linked, scientists are yet to give a definitive answer as to which one is the cause and which one is the effect.

While it is primarily associated with well-being and good mood, you would be surprised to know that 90% of your body’s serotonin is localized in the enterochromaffin cells, i.e, your digestive tract.

Now, the interesting point to be noted here is that while the serotonin produced in the gut and the one produced in the brain are structurally similar. However, since they are produced at two different locations in the body, and that too by different types of cells, their localized functions are different.

From here, the bloodstream picks up the serotonin and circulates it throughout the body, and hence its presence in blood platelets (as mentioned before).

In the brain, it is produced by a specific type of nerve cells called raphe neurons.

One of the most amazing things about the human body is the presence of trillions (yes, trillions) of bacteria in the gut, its function in the immune system, and the interlinking of this gut microbiome with the brain and its multifarious functions.

To understand this oddly surprising fact, we must first get acquainted with the vagus nerve, the largest cranial nerve in our body. This connects the brain and the gut and thus serves as the passage between these two seemingly distinct however close-knit organ systems. 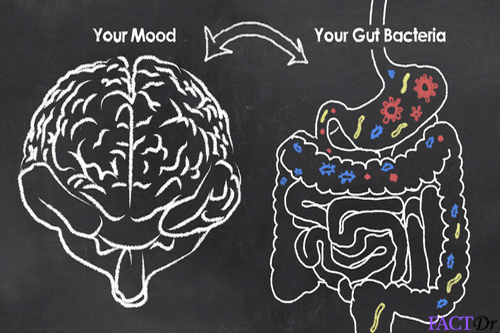 Due to this interconnection, whatever the brain “feels” the gut “feels” it too and vice versa.

That means any sort of negative emotional response such as stress or anxiety or anger is translated into a “negative” paradigm shift in your gut. This could mean anything ranging from mild digestive discomfort to the severe symptoms of IBS or cramps.

Similarly, any disturbance in the gut flora tends to spawn psychological disturbances too.

Studies have revealed that a high proportion of people experiencing chronic digestive disorders such as IBS, diarrhea, constipation etc also suffer from psychological conditions such as anxiety and depression.

Adding to this fact that serotonin is produced in both these locations gives us a clue about the most fundamental functions of this neurotransmitter – digestion and emotions.

Now that we have a general idea about serotonin is integrated with two very important bodily functions, let us see in depth how serotonin is similarly involved in other organ systems.

Serotonin: Why do we need this neurotransmitter?

Serotonin is a dynamic chemical that is deeply involved in a multitude of functions that are critical to our survival. Some of these are explained below:

From the “highs” of  psychedelic drugs to the “lows” of depression 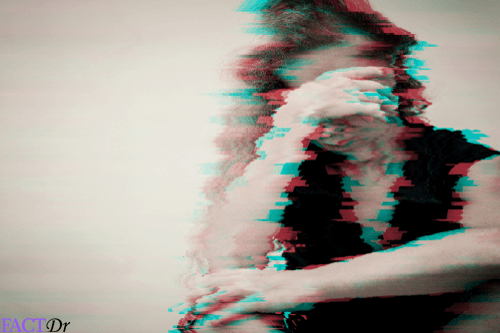 You must have read, seen, heard (or maybe even experienced) the bizarre and “out-of-the-world” experience felt by people who take hallucinogenic drugs such as LSD.

The users of this psychogenic substance have reported showing an extremely altered and surreal state of mind which is predominantly a lucid state of dreaming and enhanced focus.

This particular drug suppresses the serotonin production the same way it is shut down when you are in REM sleep and are, in fact, dreaming. Thus, LSD in a way mimics REM state sleep without you actually sleeping spawning surrealistic visions and hallucinations.

However, with other drugs such as MDMA or ecstasy, instead of shutting off the serotonin supply completely, they completely flood the brain with the “feel good” hormone (some experts call serotonin a hormone as well).

This results in sudden spikes of huge “feel good” emotions which people colloquially call a “high”.

However, it must be understood that such unnatural methods of excitation or inhibition of serotonin (or any other hormone) could well translate into addiction and substance abuse and that brings us to the next aspect very important with respect to the serotonin, i.e., depression.

A mention of serotonin would remain incomplete if its important in the context of depression is not covered.

Since the past 5 decades, it has been believed by the scientific community that a low serotonin level is a precursor to depression. This theory, also dubbed as “serotonin hypothesis”, however, has not yet been substantiated with enough evidence and facts.

Nevertheless, the role of serotonin and the onset of depression are not completely unrelated.

According to the “serotonin hypothesis”, depression or related psychological dysfunction such as stress, anxiety, or even Obsessive Compulsive Disorder occurs when at least one of the following events occur:

Other experts postulate that depression is a result of stress which suppresses the formation of new brain cells. This theory sides with the fact that stress, indeed, is a precursor to depression.

SSRIs or Selective Serotonin Reuptake Inhibitors or the drugs which are prescribed to patients with depression. These drugs work by boosting serotonin levels and thereby bringing down the depressive tendencies of the patient.

Having said that, there isn’t enough evidence to exactly link the downward trajectory of serotonin supply in the brain and the onset of depression or other mental illnesses.

Many believe that SSRIs work by boosting serotonin levels that boost the creation of new brain cells and this phenomenon aids in mitigating depression.

In a nutshell, serotonin is somewhere involved in the process of treating depression but its exact mechanism still largely eludes the scientific community.

How to boost your serotonin levels? 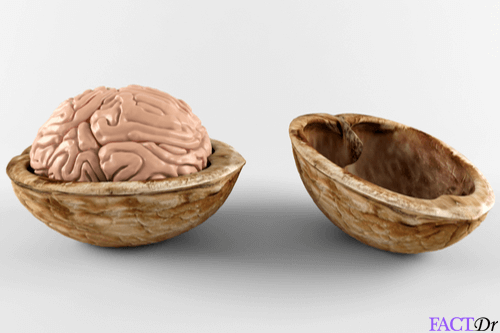 Depression or no depression, it is quite evident that serotonin is a crucial chemical with respect to our entire body.

Thus maintaining a healthy balance of serotonin production with other chemical neurotransmitters is critical to both physical and mental health.

One must remember that serotonin is not a vitamin or mineral that can be directly obtained from the diet.

Since it is derived from the essential amino acid tryptophan, any food that helps you boost the level of this amino acid will indirectly help the production of serotonin.

The following tips will help you boost your serotonin levels naturally: