Common diseases that could cripple your vital organs 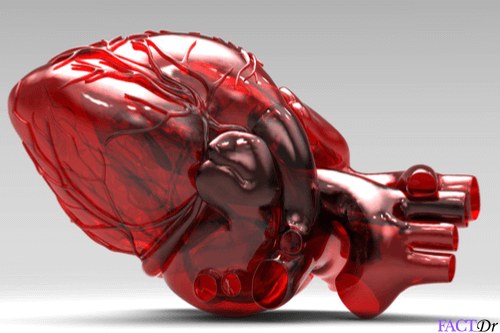 What are the vital organs?

The human body has 5 vital organs – brain, heart, kidneys, liver, and lungs. These organs carry out fundamental functions that are essential for sustaining life.

Every vital process that is carried out in the human body – digestion, respiration, excretion, metabolism, and circulation – each is performed by these vital organs (and organ systems).

Thus, it’s not a surprise that any dysfunction or disease in any of these vital organs can heavily impact the human body and severely restrict healthy living.

These can also be fatal in a number of cases.

Brain diseases or neurological diseases is an umbrella term that encompasses diseases of the central and peripheral nervous systems.

These primarily affect the cognitive abilities of an individual but may also progress further to hinder movement and functioning of other vital organs too.

Brain diseases can be broadly classified into two categories – diseases or injuries pertaining to the neurological set-up of the brain such as meningitis, stroke, or encephalitis and conditions pertaining to neuropsychiatry such as dementia, epilepsy, and multiple sclerosis. 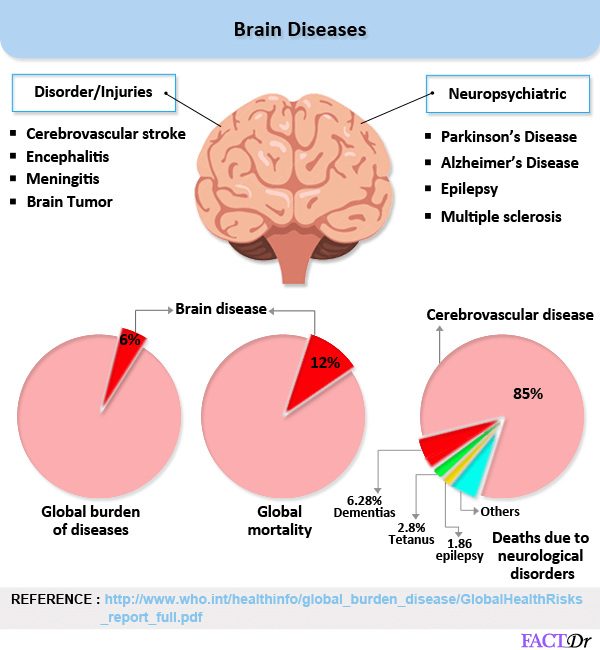 As per the reports published by WHO, brain diseases pose a major global burden. Neurological disorders comprise 2% of the global burden of diseases.

This category of diseases poses a bigger global burden than respiratory and digestive diseases.

Liver failure stands as a major threat to the urban population as most of the cases of liver failure, cirrhosis, and cancer can be strongly linked to faulty dietary and lifestyle pattern.

Alcohol consumption and high sugar/cholesterol diet are one of the biggest culprits. Permanent liver scarring or liver cirrhosis is also a significant cause of liver failure. Other reasons include bacterial/viral infections, an overdose of drugs (both pharmaceutical and recreational), and other pre-existing conditions such as fatty liver disorder and autoimmune diseases.

According to the latest studies, alcohol consumption claimed more than 3 million lives in 2016.

Currently, there are around 2.3 billion people on the planet who consume alcohol and the average consumption of alcohol is 33 grams of pure alcohol per day.  As per WHO, 3.8% of global mortality can be attributed to alcohol consumption. 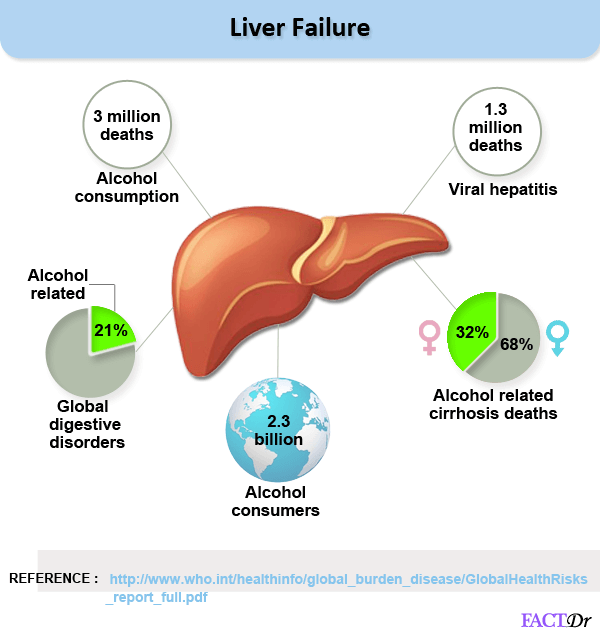 Alcohol consumption is linked to 21.3% of all cases of digestive disorders reported worldwide, a majority of which are liver-related.  Additionally, 1.3 million deaths occur annually as a result of viral hepatitis. Alcohol-related liver cirrhosis deaths occur more in men than in women (336,400 males vs. 156,900 females – 2010 reports).

Cardiac arrest describes one of the most serious and pressing medical conditions pertaining to the heart where the heart stops pumping blood abruptly.

This highly fatal condition, also known as sudden cardiac death, falls under the category of cardiovascular diseases – the number one killer of human beings today. 31% of all global deaths can be attributed to cardiac conditions. Cardiac diseases can be majorly linked to faulty dietary and lifestyle habits.

Smoking and other forms of tobacco use, alcohol, fatty food, stress, and lack of physical activities – these are the major culprits behind the cardiac arrest.  It is estimated that every 90 seconds 1 person dies due to cardiac arrest.

Of the 382,000 people who experience cardiac arrest worldwide, only 50% of them receive timely help.

Death can occur in a matter of a few minutes in many cases.  Of those who survive, 1/4th of them will develop psychological issues such as PTSD (Post Traumatic Stress Disorder) or even depression.

80% of all deaths caused by NCDs (non-communicable diseases such as heart diseases) occur in low and middle-income countries.  According to the Global Burden of Diseases estimates, the YLD or Years Living with Disability of the entire world amounts up to 751 million YLDS and heart diseases constitute a massive 68% of this colossal statistic. 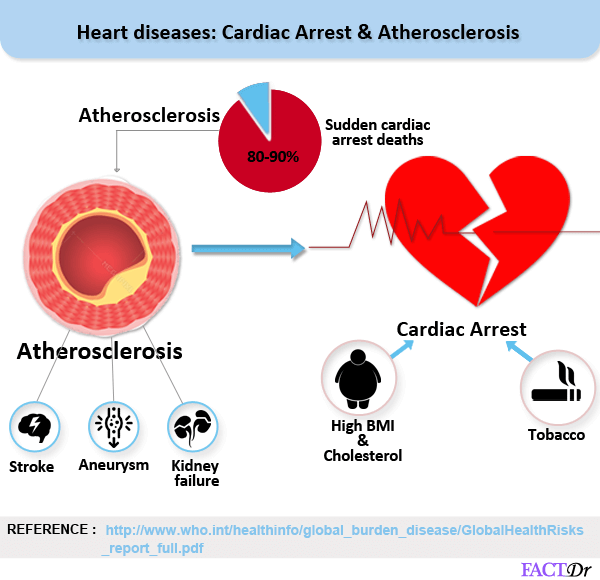 One of the biggest pathological reasons behind the abrupt stoppage of heart function (cardiac death) is atherosclerosis.

In this condition, a waxy plaque deposits on the walls of the coronary artery that hinders the circulation. This could cause the heart to stop beating that automatically leads to a cardiac arrest or sudden cardiac death.

Diets rich in dairy and meats are interlinked to atherosclerosis too. In addition to causing severe and life-threatening heart conditions, atherosclerosis is also responsible for cerebral strokes, aneurysm, and even kidney failure.

Often high income countries show higher tendencies of lifestyle diseases such as high cholesterol, obesity, and cardiac issues. However, in the past 20 years, these nations have successfully reduced the incidence of such diseases.

In contrast, low and middle-income countries are showing an upward trend in mortalities that can be attributed to high BMI, blood sugar, and cholesterol levels.

The human urine contains several chemicals and minerals- mostly calcium and oxalates that are flushed out of the body.

When the concentration of these minerals increases, they tend to form deposits in the form of kidney stones.  In the past few decades, the prevalence of kidney stones in the American population has witnessed a steep upward trend and is postulated to increase further in the upcoming years (from 3.2% of the general population during the 70s to 5.2% in the 90s).

It is responsible for more than 3 million visits to the doctor (in the USA) and out of these almost 500,000 require hospitalization. 5-10% of all patients with kidney stones require immediate hospitalization and surgery.

Upon examination, it has been found that 80% of all kidney stones contain calcium as the main mineral.  It is prevalent twice as many times in men than in women. And those who have had kidney stones before have 30-50% of developing it again within a period of 5-7 years. 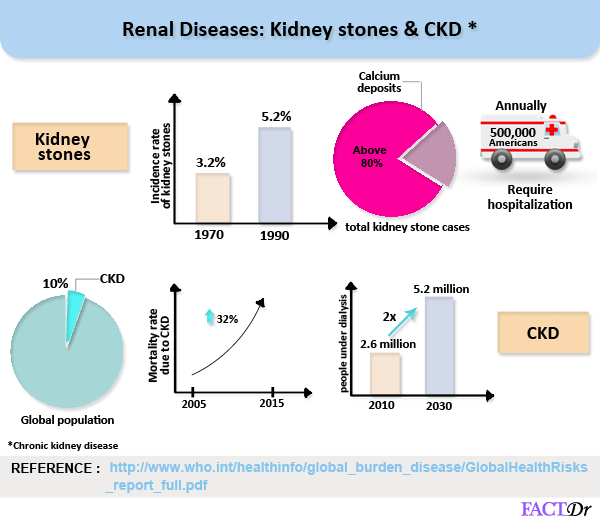 As the name suggests, Chronic Kidney Disease refers to the permanent damage to the kidney that results in severe renal malfunction.

Currently, it is prevalent in 10% of the entire global population. The most inevitable consequence of chronic kidney disease is complete kidney failure which is highly fatal.

In addition to this, chronic kidney disease is co-morbid with other life-threatening conditions such as high blood pressure (hypertension), diabetes, heart diseases, malaria, and even HIV infections.

According to the 2015 report of GBD (Global Burden of Disease), 1.2 million fatalities and 19 million DALYs due to cardiovascular diseases were related to chronic kidney diseases.

The DALYs caused due to kidney diseases has increased from 19 million in 1990 to 33 million in 2013. In 2010, 2.6 million were undergoing kidney dialysis. Experts suggest that this figure is expected to double by the year 2030.

Emphysema is a type of COPD or Chronic Obstructive Pulmonary Disease caused by permanent damage to the alveoli (air sacs).

The lungs lose their “spongy-ness” and thus trap in more air than what is exhaled. This is often an under-diagnosed and life-threatening condition which is postulated to become the 3rd leading cause of global deaths by 2030.

Today COPD alone claims more than 3 million lives annually and is prevalent in more than 250 million people worldwide.  Almost 90% of all deaths due to this chronic illness occur in low and middle-income countries.

Cigarette smoking is the number one reason for emphysema. In addition to this, second-hand smoking and exposure to environmental pollutants are responsible for the widespread incidence of this disease.

Though it is common and highly pervasive, it also highly preventable. In 80-90% of cases of COPD, the patient has been a smoker. If left untreated, emphysema can progress to pneumonia, collapsed lung, and even severe cardiac conditions. 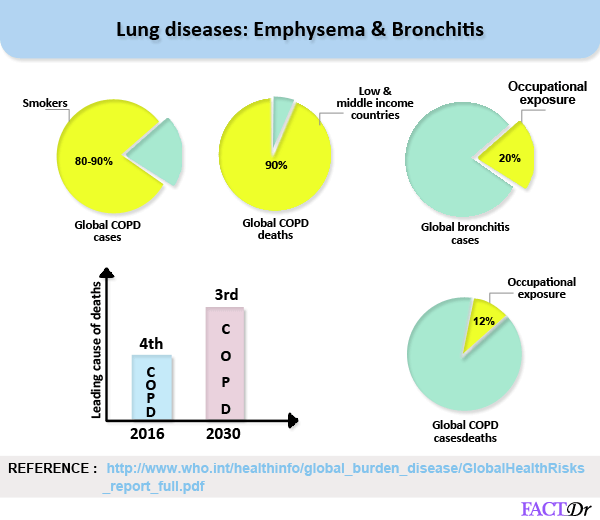 Similar to emphysema, bronchitis is also a chronic lung condition categorized under COPD.

The air pathways are in a state inflammation in bronchitis and there is excessive mucus production. This narrows the bronchioles and leads to severe breathlessness.  This could be brought on bacterial and viral infections, environmental pollution, seasonal allergens, but mostly because of tobacco smoke.

As per the reports published by WHO, 42% of all chronic respiratory disorders can be traced back to tobacco smoking.

Every year, more than 10 million cases of chronic bronchitis are reported in the USA.  Women are twice as much likely to develop bronchitis as men.

The most lethal fields of occupation in this context are silica mines, stone quarries, agriculture work, textile industries, and paper mills. In addition to causing chronic pulmonary conditions, hazardous occupational exposures account for 8% of all lung cancer cases.

The thyroid gland is perhaps one of the most vital endocrine glands that is involved in the critical bodily processes of metabolism and growth.

The thyroid also governs temperature regulation within the body. Any slight dysfunction in the functioning of this gland can result in serious bodily symptoms – most of them pertaining to weight, appetite, and energy levels.

Thyroid disorders are quite common. As per studies, more than 200 million people across the world have some form thyroid disorder. Fluctuations in the production of thyroid hormones can impact the immune system as well.

Abnormal enlargement of the thyroid gland can result in a condition called goiter, which can be related to either too high or too low production of thyroid hormones. Usually, thyroid disorders can be linked to iodine deficiency. 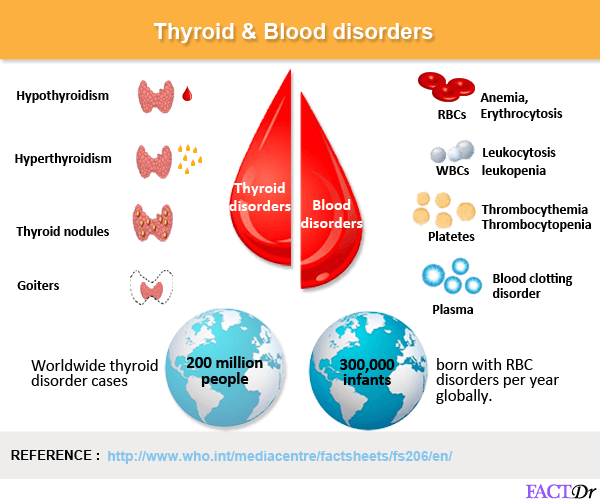 Blood disorders occur when there is an imbalance in the count/concentration of blood components – RBCs, WBCs, Platelets, and plasma.

These components are responsible for the transport of oxygen, fighting disease-causing pathogens, clotting of blood, and other critical functions.

Infections, unhealthy lifestyle, genetics, and infections – these are the major causes of blood disorders. Usually, these are treated by blood transfusion, diet modification, and medications.

The most common symptoms of blood disorders are weakness, shortness of breath, weight loss, bone deformities, embolism, frequent headaches, and dizziness. Folate and iron-rich foods can help in reducing the severity of the symptoms.