7 startling facts that will make you quit alcohol today 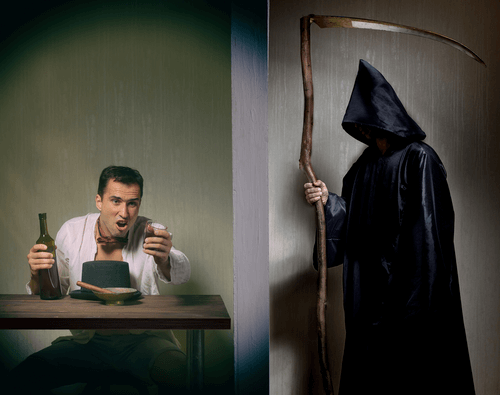 How ancient is alcohol really?

Since the dawn of civilization, man has found great fascination in concocting fermented beverages. Be it from grains or from ripe fruits – alcohol-making appears in the earliest recorded documents, dating back to 7000 B.C.

There are numerous reasons as to how this culture of alcohol consumption stood the test of time. It tasted good, brought in the state of drunkenness, and may be sent people in a brief state of euphoria.

Every alcohol lover will have his/her own reason to be thrilled just by the mention of it.

So there is a magic potion that makes you forget all your worries, lowers your inhibitions, and makes you feel “lighter”. The after-effects of drinking sound too good to be true.

While a peg or two might give a brief glimpse of heaven, in reality, it does so by heavily corroding your bodily functions.

The link between heavy drinking and deteriorating health is not a new finding.

Several works of ancient literature discuss the dangers of alcohol on the human body.

So what really happens to your body when you start drinking?

What makes drinking a major health hazard is that it is directly absorbed into the bloodstream. This is probably why you get “high” immediately after pouring down a shot of vodka down your throat.

While many think that the effect of drinking lasts as long as they feel “light-headed”, science contends otherwise.

Alcohol is regarded one of the most popular recreational “drug” for a reason. It is massively addictive and unhealthy. Global statistics reveal that 1 death every 10 seconds can be attributed to drinking.

This makes alcoholism one of the leading lifestyle-related causes of death. The perils of drinking range from the onset of chronic ailments to long-term neurological conditions.

Discover some shocking facts on how alcohol can single-handedly sabotage you health.

Fact #1. Even one night of heavy drinking can increase your chances of cardiomyopathy

And the risk of other cardiovascular diseases too such as hypertension, arrhythmia, and even stroke.

While there are many studies that link moderate drinking to improved heart health, people tend to misinterpret this is a reason to indulge in more than the usual share of pegs.

Hard drinks have never been beneficial for the body. Only red wine has shown some association with improved heart health. Since the link between drinking and cardiovascular health is an extremely complex one, one single rule cannot dictate how much is drinking is safe for you.

Nevertheless, alcohol renders critical side-effects on the working of your heart.

It elevates your heartbeat and shoots your blood pressure. Individuals who already have a hypertensive predisposition face the risk of stroke or heart attack.

Not to mention, those who binge drink on empty stomach exhibit these symptoms on a larger scale. Alcohol also lowers the capacity of the heart muscles to pump blood.

Cardiomyopathy or cardiac arrest, which could be fatal in nature depending upon the age and health of the individual.

Fact#2. Alcohol is a potential toxin – for your liver and your stomach 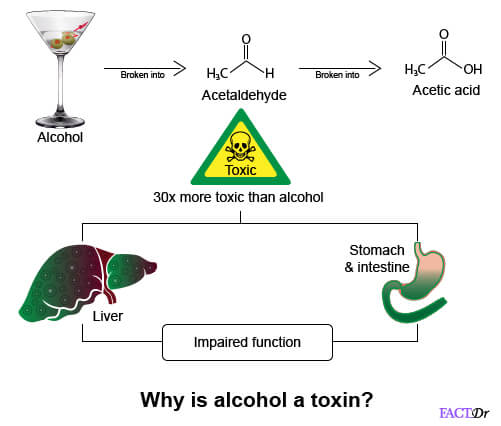 Alcohol gets converted into acetaldehyde once we consume it.

This substance is 30 times more poisonous than alcohol (ethanol) itself.

As this poison trickles down your digestive system it casts major side-effects on two of your most vital organs – the stomach and the liver.

Alcohol leads to a manifestation of numerous lethal liver conditions which are studied under the category of ARLD (Alcohol-Related Liver Diseases).

These deposit as fats around the liver which leads to FLD.

Further binge-ing on alcohol can cause severe inflammation of the liver which leads to hepatitis. When the liver gets scarred because of excessive alcohol consumption, the resulting condition is known as cirrhosis.

The scary part about alcohol and liver damage is that in most people the symptoms are not visible until it reaches the advanced stage (cirrhosis).

Alcohol is the primary reason for cancer in the stomach, pancreas, and the colon.

Those who are lucky enough to not be diagnosed with cancer, they still suffer the wrath of acid reflux. Drinking increases acid production in the stomach.

This leads to gastritis, peptic ulcers, vomiting, diarrhea, and even abdominal bleeding.

If these were not enough, alcohol weakens your nutrient-absorbing capacity. This means that even if you are eating all your greens, you might not be getting the health benefits thanks to your frequent nightcaps and visits to the bar.

Fact #3. Alcohol is a depressant. Ergo, it doesn’t make you happy

It’s natural to feel discomfited with the idea that alcohol is a depressant or in colloquial terms, a “downer”. That’s because most of your late-night partying with binge-boozing are associated with happy, uninhibited memories.

So, your mind automatically starts assuming that booze is the harbinger of happiness.

Alcohol, just like Barbiturates and Benzodiazepines (Xanax and Valium), is a Central Nervous System (CNS) depressant.

Ethanol inhibits our neurotransmitters and renders sedation. The intoxication caused by alcohol often sends our mind in the state anti-anxiety or anti-panic.

That is a major reason why people feel uninhibited and much bolder under the effect of alcohol. But this side-effect is not as positive as it sounds.

Depression and episodes of Major Depressive Disorder are associated with drinking.Studies reveal that patients with depression who are alcoholic are 75 times more likely to commit suicide than non-alcoholics.

In general public, this figure can vary anywhere from 5-20 times. 15% of all heavy alcoholic abusers commit suicide.

Additionally, alcohol also hinders cognitive functions and leads to black-outs (short-term memory loss). It decreases our attention spans and could lead to the development of numerous psychiatric disorders.

Panic disorders, Psychosis, hallucinations, and Anxiety are just the tip of the iceberg.

Fact #4. Alcohol attacks your frontal cortex – the emotion and judgment center of your brain 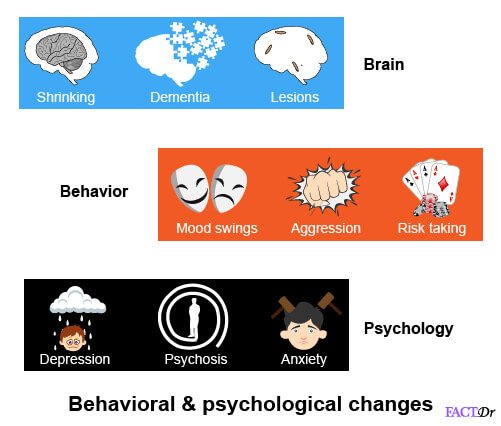 Have you seen how quickly a shot of tequila can transform a shy and timid person to a raging risk taker?

It is a common observation that alcohol consumption melts your inhibitions and gives you a sudden boost of courage.

Like driving way above safe limits or engaging in a fist fight.

How on earth did this major transformation happen?

How can such a tiny amount of liquid make you a heckler or a gambler within a split of a second?

That’s because as soon as alcohol mixes with our bloodstream and gets carried to our brain, it first attacks the frontal lobe. The frontal lobe (cortex) is the region of the brain which controls our emotional response and decision-making capacity.

Since alcohol is a depressant, it tends to numb our emotional reactions and the quality of our judgment. The immediate result is that we start appearing more out-going.

This sudden change of personality is not actual happiness but aggression that has not been channelized.

With more drinking, this gregarious attitude takes the form of rage.

We tend to become more brash, violent, and risk-taking.

Fact#5. One glass of wine is calorically equal to a bar of chocolate 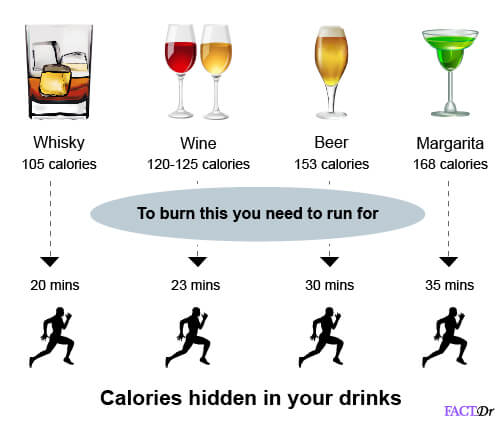 And a pint of lager is roughly equal a cheesy slice of pizza or a bag of deep-fried potato chips.

Finding it hard to believe?

What is alcohol made up of? Fermented grains and certain fruits.

What are these rich in?

This means that even if your drink tastes bitter, it contains only sugar and empty calories.

And these are not same as healthy calories. Calories consumed via drinking are empty calories because these come with zero nutrition.

What happens when you endlessly chug pitchers of beer?

You unknowingly consume large chunks of calories which deposit mostly around your waist and vital organs (visceral fats). This increased sugar consumption has both direct and indirect effects on your body.

Firstly, it increases your insulin resistance making you vulnerable to diabetes and obesity.

Secondly, drinking itself slows down your metabolism. This means now you burn your fats at an even slower rate. The additive effect of both is that you tend to gain more weight (the beer belly syndrome).

Fact#6. The alcohol withdrawal symptoms are not permanent; the benefits are. 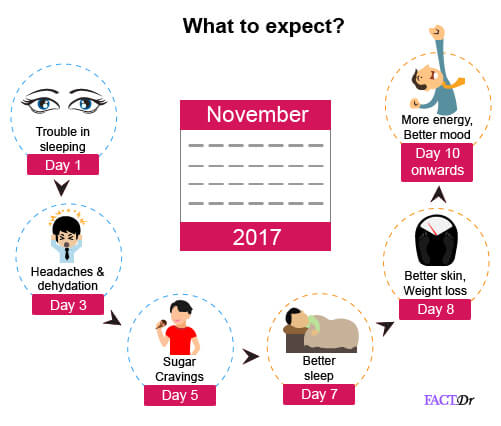 The proponents of heavy drinking often use the dangers of AWS (Alcohol Withdrawal Symptoms) as one of the major reasons they shouldn’t quit.

AWS can be defined as a set of symptoms exhibited by an alcoholic when he/she stops drinking.

It can begin anywhere between 6-8 hours after the last drink consumed.

The degree to which these symptoms present their severity depends upon a number of factors – age, medical history, amount of binge-drinking, and many more.

Only 3-5% of patients show a severe form of AWS.

The complete alcohol Detox generally takes 3 days to a couple of weeks.

Once you leave drinking, within 12-24 hours your blood sugar levels begin to normalize.

The “hangover” feelings of a headache and nausea usually end by day 3. Within 1 week of quitting, your skin starts showing signs of hydration and youth. Gradually, you start getting better sleep and can observe a decrease in the width of your waistline.

Fact#7.  Alcohol is the third leading PREVENTABLE cause of death 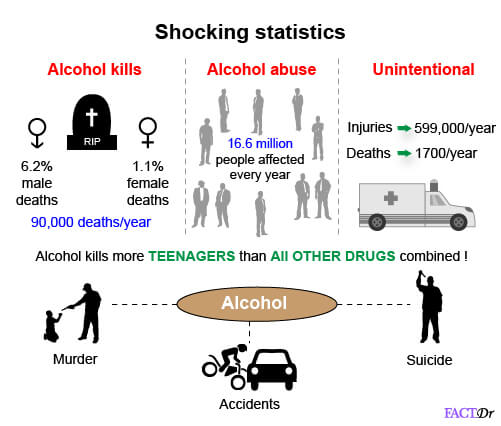 Drinking is the 3rd most leading preventable cause of death.

It kills more than 88,000 people every year in the USA alone.

Increase in alcohol consumption is related to a surge in violent crimes.

Alcohol can kill both directly and indirectly. Direct reasons include health complications.

In 2012, drinking caused  3.3 million worldwide deaths. This was almost 5.9% of total global deaths.

According to WHO, there are 200 different fatal ailments and injuries where drinking plays a key role.