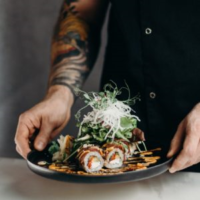 Is it safe to eat sushi during pregnancy?

No. Sushi is also made with cooked food like an eel, crab meat, etc. Some western restaurants also serve grilled squid, octopus, or smoked salmon.

Are there vegan sushi rolls?

Even though Sushi is the most famous Japanese dish around the world and one of the most popular dishes in Japan, many people have misconceptions about it.  For most people, raw fish is the most important ingredient of a Sushi dish, even though it is not so. In fact, the most important part of the dish is rice and it may or may not include fish. As the concept of sushi spread outside Japan, it evolved in various ways depending on the local cultures of the country. In the USA itself, there are quite a few variations of sushi. In many places, sushi has become the generic name for a dish that includes Japanese-type rice, different types of seafood, and vegetables. It is commonly served with items like soy sauce, wasabi, and pickled ginger. In Japan too, there are different forms of sushi based on the expertise of the chef.

The origin of the dish is not very clear and many believe that it originated in Laos, Thailand, and Vietnam during the fifth and the third centuries BC. In the historical records, sushi had been around for a long time and it was first mentioned in Chinese documents around the second century A.D. The original forms of sushi were quite different than their present form and it was used to preserve food. Raw fish that was caught would get decayed in the heat and hence a method of preservation was needed. At first, the fish were cleaned, gutted, and kept with salt to dry. Then they were packed with rice and were allowed to ferment. The sugars of the rice turned into acids in the process and prevented the growth of microorganisms in the fish. This made it suitable for consumption for longer periods and while consuming the rice was discarded.

The evolution of sushi

The popularity of sushi spread across China and made its way to Japan by the seventh century. Originally, the dish tasted good but its smell was revolting for many people. So, the Japanese took steps to control the process of fermentation and minimise the stench. In the 17th century, the process of fermentation was further minimised by the addition of vinegar and this dish came to be known as haya-zushi (fast sushi). Records show that in the early half of the 17th century, Matsumoto Yoshiichi of Edo (presently Tokyo) started seasoning the rice with rice wine vinegar while preparing his version of sushi. This dish was suitable for immediate consumption instead of storing it. Legends say that in the 19th century Hanaya Yohei devised a new method for preparing sushi by placing fresh fish on top of an oblong-shaped piece of seasoned rice. This was termed as ‘nigiri sushi’ (finger sushi) and it is still one of the popular ways of eating sushi in Japan. This dish became popular as fast food in Japan and many stalls were set up in the country.

When the Great Kanto earthquake of 1923 devastated Japan, sushi was the popular dish for numerous homeless people across the country. After World War Two, these stalls were shut down and the process of preparing sushi shifted indoors where it became a complete dining experience. With the rise of refrigeration, the direct use of raw fish in the dish also became possible. In the modern era, the increased means of communication took the dish to the USA and Europe. Now sushi preparation has evolved to move beyond the traditional Japanese methods. It has also become a fusion dish in many top restaurants around the world. The 2000-year-old dish that started with a stink has been converted into a popular delicacy with time.

The nutritional aspects of sushi 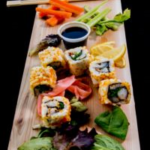 Basically, sushi is a roll made from rice, seaweed, vegetables, and raw or cooked seafood. While it is basically a healthy dish, the method of preparation plays an important role in making it a good choice for a calorie-conscious individual. When sushi is packed with items like mayonnaise, fried items, and salt it is not a food that can be termed as a healthy option. Portion control is also an important aspect of this dish as even though it may look compact, a dish of sushi can pack a lot of calories. The use of white rice and sugars play an important role in making the dish rich in calories. On the other hand, fish is generally low in calories, high in protein, and contains powerful nutrients like omega-3 fatty acids. The addition of steamed and fresh vegetables adds vitamins and fibre, and avocados contain a healthy dose of fat. The dips and sauces can significantly increase the amount of sodium and fat in sushi and so dieticians recommend a controlled use of those items.

As per the USDA nutrition database, 100 grams of cooked short-grain white rice used in sushi contains 130 calories, 2.4 grams of protein, 0.2 grams of fat, and 28.7 grams of carbohydrate. Since this is a rich source of carbohydrates without providing a lot of proteins, balancing this with vegetables and fish is essential. The nutrient content in some popular sushi dishes is listed below for reference.

The health benefits of sushi 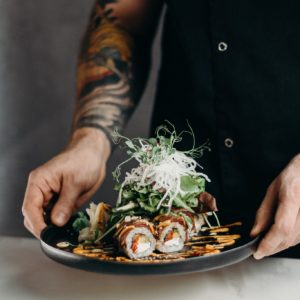 A rich source of Omega3

The fish oils in sushi are extremely rich in omega-3 which are essential fats that cannot be prepared by the body. These oils have a wide range of health benefits including reducing high cholesterol and triglyceride levels, risk of heart disease and overall inflammation, and lowering blood pressure. They also lessen the chances of sudden cardiac arrest in people suffering from heart disease. These oils also help in the proper growth and regeneration of the brain cells that aid in boosting memory and in the better functioning of the mind.

The protein in fish balances the blood sugar levels and provides a steady supply of energy to the body. In addition, sushi also contains vegetables that provide a good dose of dietary fibre. This leads to longer spells of satiety, enhanced metabolism, and less chance of snacking between meals. This makes it an ideal choice for cutting calories and maintaining weight.

The fish oils can also act to reduce the symptoms of psychosis, depression, and bipolar disorder. These oils can travel into the brain cells and interact with the molecules that affect the mood, making them a natural solution for various mood disorders. However, more research is needed in this area to assess the exact dosage and effects of long-term use.

Sushi is also a good source of antioxidants and it prevents oxidation-related damage to the skin. This helps to keep the skin healthy and slow down the effects of aging. With the prevention of cell damage, the overall structure of the skin is preserved in a better manner. The antioxidants also neutralise the free radicles and reduce the chances of the formation of cancerous cells in the body.

Fish is also a potent source of calcium which is the primary mineral responsible for good bone health. The regular consumption of fish can keep the joints healthy and prevent the chances of osteoporosis as a person ages. Calcium also plays a major role in the functioning of muscle, maintaining the heart rhythm and functioning of the enzymes.

Sushi also contains plenty of other minerals like zinc, calcium, magnesium, phosphorous, and iron which are essential for energy production and immunity. These minerals along with the protein content also make it a good food for muscle repair and recovery. Hence the dish can be ideal support for any fitness regime. In addition, the seaweed used in sushi is also rich in iodine. This helps in the prevention of any imbalances in the thyroid gland.

Sushi rolls are some of the easiest food items that you can make with a few simple ingredients. Once you master some basic techniques you can make them quickly and easily in your own kitchen. Here are the guidelines to make three types of sushi rolls. Before you start with these recipes, you will need a sushi mat, a knife, a cutting board, and sushi rice. 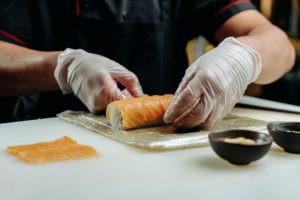 First cook the rice in boiling water and set it aside for 15 to 20 minutes. Pour the vinegar over rice and mix. Put it aside for some to cool. Then put 1 nori sheet on the sushi mat and cover the surface with half of the cooled rice. Lay half of the salmon slices and cucumber slices along the length of the rice, without overfilling. Add some wasabi along the edge of the filling with your finger. Roll the sheet tight and squeeze the ends with a few drops of water to seal it up. Prepare the other roll and then slice each roll into equal-sized small parts. Serve with ginger and soy sauce. 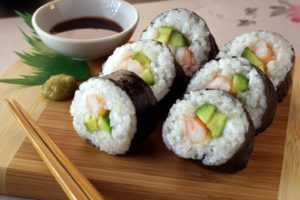 First cook the rice in boiling water and set it aside for 15 to 20 minutes. Pour the vinegar over rice and mix and then set the mixture aside to cool at room temperature. Peel the avocado and make thin slices from it. Spread the nori on the sushi mat and cover its rough surface with half of the cooked rice. Place two or three slices of avocado on top of the rice. Roll up the nori carefully with the avocado placed between it and squeeze to seal the ends once the rolling is done. A few drops of water on one end of the nori will help it to adhere to the dry end. Cut the roll into equal sizes and serve. You can also add some sliced cucumber with avocado to add more variety to the dish.

Cook the rice first and mix it with vinegar. When the rice is cooled, spread it evenly over a nori sheet and spread some sesame seeds on top. Press the rice lightly on the sheet and flip it over so that the rice goes on the outside. Place the crabsticks, cucumber, and avocado over the nori. Now you can roll up the sushi and seal it once the top and bottom end meet. You can then cut the roll into smaller pieces and serve with the ginger pickle and the soy sauce.

When cooked in the right manner sushi is one of the healthiest dishes that you can consume. At the same time, it is best to be careful while consuming raw fish as there are chances of bacterial infection from it. Another disadvantage of sushi is the mercury content in seafood that can impact the health of children and pregnant women. So, it is best to order sushi from reputed restaurants that follow proper food safety practices. To make your sushi more effective from a health point of view, ensure that the proportion of vegetables and fish to rice is higher.

Is it safe to eat sushi during pregnancy?

No. Sushi is also made with cooked food like an eel, crab meat, etc. Some western restaurants also serve grilled squid, octopus, or smoked salmon.

Are there vegan sushi rolls?