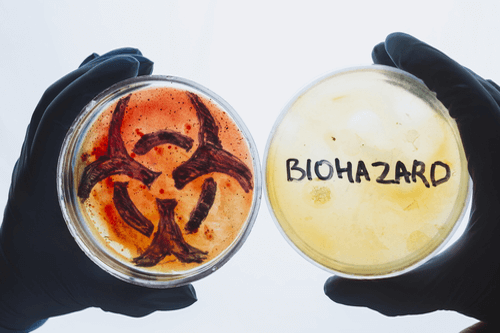 Bacteria vs.Virus: who survives in the end?

Coughing, runny nose, fever, vomiting, fatigue, and nausea – all of these symptoms are common to both bacterial and viral infections.Historically speaking, both these kinds of microbes have led to deadly epidemics, wiping out millions of people from the face of the planet.

Be it the Bubonic Plague, spread by the Yersinia Pestis bacteria or the Ebola Hemorrhagic Fever, caused by the ebolavirus – these pathogens have been responsible for countless fatalities and pronounced disability worldwide.

In 1928, when Sir Alexander Fleming discovered the substance Penicillin, he made a breakthrough in the field of medical science. His prized discovery presented to the world the first ever antibiotic – an all-powerful drug that had the potential to destroy the deadly invasion of bacteria in human body. Since then, antibiotic drugs have witnessed a widespread use in the treatment of innumerable infections such as pneumonia or measles.

Why are antibiotics ineffective against virus?

Strictly speaking, antibiotics were developed in order to curb bacterial infections in human beings. These operate by either destroying the bacterial legion or making it impossible for them to multiply and spread. But on viral infections, it has no effect. This is because there are fundamental differences between a bacterial and viral invasion. 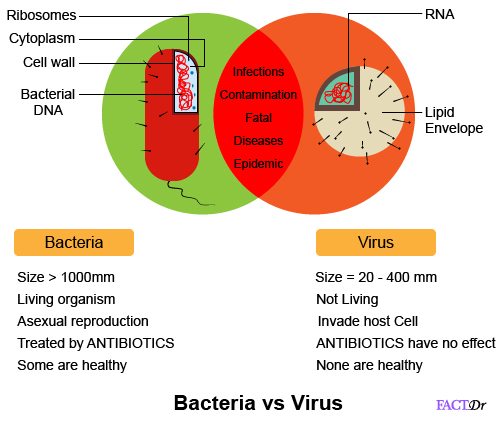 Firstly, a virus is much smaller in size when compared to a bacterium. Bacteria are single-celled structures. They are usually surrounded by a thin membrane and a cell wall. Several types of bacteria are good for our health. Our body houses a large population of healthy bacteria, especially in the gut, which aid digestion. Certain bacteria are also found to have cancer-fighting abilities. Only 1% of the entire known bacteria can cause infections and diseases in a human body.

A virus, on the other hand, is much smaller and more lethal in nature. Their structure is fundamentally different from that of the bacteria. All they are made up of is some genetic material (DNA or RNA) and an outer coating of protein.

During a viral infection, a virus attaches itself to a healthy host cell; restructure the host cell to produce more viruses till the host cell bursts and dies. Viruses are major disease-causing agents.

An antibiotic cannot target and kill viruses, as it does in case of bacteria. So when you use antibiotic medications to cure viral attack, it becomes ineffective. In addition to this, it creates another set of problems known as antibiotic resistance.

This refers to the situation where bacteria grow strong or resistant to the power of antibiotics. This happens when you use antibiotics to treat viral infections and/or overuse antibiotics for every other bodily condition. 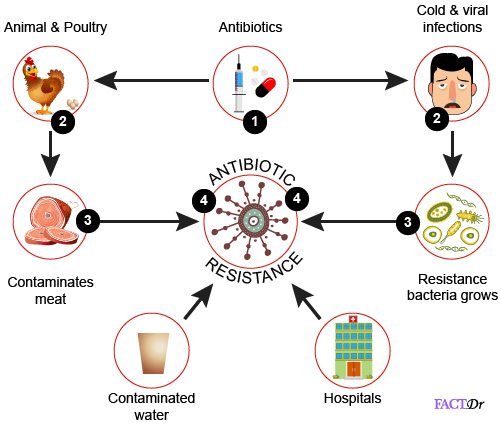 Antibiotic resistance decreases the effectiveness of the antibiotic substance as the bacteria evolves quickly to counter it. This means stronger and more fatal bacterial attacks. According to WHO, antibiotic resistance is a major global healthcare issue as it is increasing the severity and growth of deadly bacterial invasions such as tuberculosis, pneumonia, salmonellosis etc. It is becoming harder to treat such infections as the antibiotics remain ineffective against the powerful bacteria.

What does this imply?

Hence, one should not readily start using antibiotic drugs for every other disease or infection, without knowing the exact cause. Similarly, medical practitioners should prescribe these drugs upon careful evaluation of the disease-causing agent. A widespread culture of overuse and misuse of antibiotics has led to a sharp increase in people acquiring antibiotics resistance which makes them more susceptible to diseases and even death.

It is estimated that more than 2 million people acquire antibiotic resistance every year in the USA alone. Almost 23,000 individuals succumb to death as a direct impact of this. Antibiotic resistance results in longer stay in hospitals, higher healthcare costs, and a greater risk of mortality.

Viral infections such as the common cold, influenza, certain sinus and ear infections, and chest congestion should not be treated with antibiotics. Experts contend that almost half of all prescribed antibiotics are actually not required. Another factor adding to the rise of antibiotic resistance is the use of these drugs in poultry animals, which are consumed by human beings.

Common diseases that could turn fatal

A steep rise in antibiotic resistance, limited access to sanitation, and poor hygiene habits – all of these have created an environment where pathogens thrive. As the natural immunity goes for a toss, even minor every-day infections transform into deadly diseases. Some of these include-

For a majority of the population, cold and flu mean a runny nose, sneezing, and a slight touch of fever. Chills and a sore throat are a packaged deal. When left untreated or worse when wrongly treated with an antibiotic, it could exacerbate the symptoms. Inner ear infections, inflammation of the sinus, chest congestion, asthma, and even pneumonia can deter the patient’s health.

Neurological complications are also seen in children, in the form of seizures, who do not receive proper treatment.Children, elderly, and pregnant women are at most risk of flu-induced serious medical conditions, and even death. This could happen as a result of prolonged high fever that affects the brain, severe dehydration, and persistent vomiting. Globally, more than 3-5 million individuals face the wrath of severe seasonal flu, out of which 290,000 to 650,000 cases result in death.

When you consume toxic or contaminated food, you get food poisoning. It could easily happen to you during camping trips or eating in certain public places where proper hygienic conditions are not maintained. The most common symptom of food poisoning is an upset stomach followed by endless vomiting and nausea. Usually, this heals within 1-2 days.

But when diarrhea extends a time-period of 3 days and/or the individual experiences a high fever, things could turn dangerous. 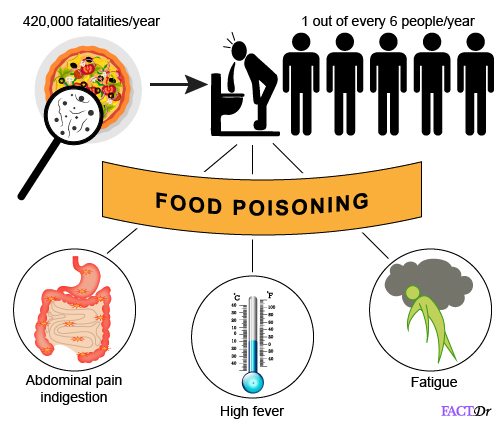 Sometimes the persistent vomiting could pave a path for excessive dehydration taking up a fatal form.Bacteria, virus, or parasites – any one of these can cause food poisoning. According to latest reports, as many as 600 million people fall prey to severe food poisoning every year. Children under the age of 5 years represent 40% of all the food-borne disease burden. As many as 420,000 face death, annually, on the account of food poisoning.

Medically known as pyrexia, is the state where the core temperature of your body rises above the normal range. It could occur as a result of an infection, or other bodily complications such as cancer, blood-related disorders, and sometimes even stress and heat stroke.

When the homeostatic temperature of the body is disturbed, your body starts losing more water to cool itself. There is a rapid breakdown of proteins or what experts call “denaturation”.

Proteins are the most important agents in maintaining proper functioning of cells. High fever disrupts this process. Prolonged high fever can thus cause excessive bodily damage, starting from the cellular level.

These could trigger seizures (febrile seizures), mostly in children. It is important to understand the underlying cause – heat exhaustion, infection, or inflammation before resorting to medication.If the body temperature doesn’t come down (hyperpyrexia or high fever), it could cause widespread cellular damage and contribute to death. 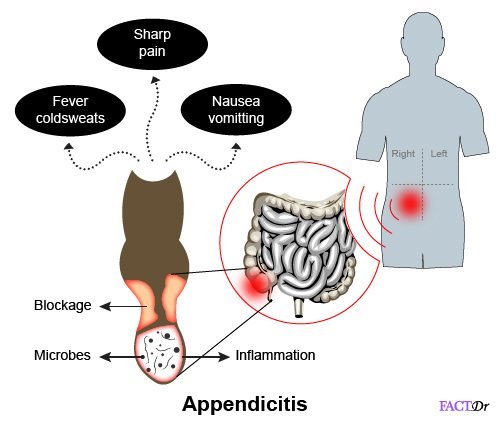 Tucked in quietly in your lower right abdomen, the appendix is a tiny tube connected to your large intestine. It remains a part of our immune system during our growth phase. As we become adults, it retires from this duty.An inflammation of the appendix can occur due to some blockage or infection. This is what appendicitis is. There is a risk of the appendix bursting in this case. The infection may be due to a pathogen attack or a build-up of mucus or fecal matter.

The mark of this condition is sudden sharp pains in the lower right abdomen followed by fever, nausea, and vomiting. An appendix can rupture suddenly (even with 48-72 hours of the onset of pain). It is important not to take painkillers at this point and immediately refer to a doctor. If the appendix ruptures, it rapidly spreads infection in your entire abdominal region which is quite deadly. It is estimated that roughly 10 million cases of appendicitis occur annually, out of which 50,000 cases end in death. 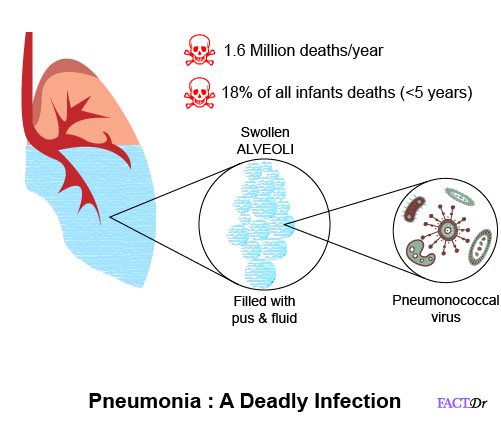 Your lungs and immune system are capable of expelling pathogens and impurities out of the body.

But sometimes, due to a weak immune system, these microbes get past the defense system and settle down in the air sacs. From here they get moisture and warmth to grow rapidly. This causes an infection and inflammation in the lungs called as pneumonia. In pneumonia, your lungs get rapidly filled with pus and fluid, and the infection gets transferred to the blood.

The person experiences difficulty in breathing as there is a large build-up of carbon-dioxide in the body. The oxygen levels start dropping fast which could be fatal in nature. When your brain and heart don’t receive proper oxygen, you could experience fatigue, confusion, dizziness, coma, and even death. Pneumonia is especially dangerous for children and makes up for 18% of all mortalities among children below 5 years of age. Annually, 1.4 million kids succumb to death due to this infection.

Contrary to popular myth, jaundice is a symptom of an underlying infection/inflammation and not a disease in itself. When a hepatitis virus attacks a liver, it may cause permanent scarring of the liver tissues resulting in cirrhosis or even cancer. The lifespan of RBCs (red blood cells) is around 120 days. After every cycle, these RBCs turn into bilirubin. Kidney and liver aid in expelling this routinely from the body.

When these organs fail to do so, there is a build-up of this substance causing jaundice, giving the patient the characteristic yellowish appearance. Other pathological conditions can also cause the onset of jaundice; such as typhoid, malaria, and yellow fever. Though it is very common, jaundice can be deadly if it not treated timely. According to WHO,  20 million cases of hepatitis infections occur worldwide. More than 40,000 of these succumb to death.

How can you protect yourself and your family?