What are the top 50 deadly and widespread diseases? 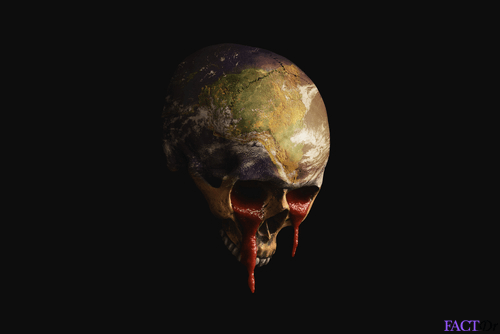 Home » Healthy living » What are the top 50 deadly and widespread diseases?

Global risk of mortality: The one thing claiming most human lives

What are the top 10 deadliest diseases and what is causing them?

Appearing for the first time in recorded history, simultaneously in two locations in 1976, the Ebola virus disease or EVD is considered to be one of the deadliest diseases known to humankind.

This virus, originating from the fruit bats local to certain African regions such as the Democratic Republic of Congo and Sudan, is dreadfully virulent and makes your own immune system kill you.

More than 70% of people infected with the EVD succumb to the infection.The dead-set intensity of the disease can be verified from the fact that 1/5th of a tbsp of the EVD infected blood can carry as many as 10 billion virus!

Deadly as it may be the number of global deaths the Ebola virus has caused till date (2016) is 11,315.Now the guess the number of deaths caused by elevated blood pressure levels every year?

As per the reports published by WHO, 13% of all global deaths can be attributed to high blood pressure.That equals roughly more than 7 million deaths per year. A simple mathematical calculation will tell you that it is 636 times the number of deaths caused by Ebola till date.

The bizarre thing about human psychology is we collectively perceive Ebola to be a bigger threat than something more rampant and deadly (at least by the numbers) such as high blood pressure. (Even though high blood pressure kills 600 times the number of people per year than Ebola has killed in the past 4 decades). This brief list will provide you a clearer perspective on the most life-threatening risk factors present in this day and age, across the world, irrespective of the country’s economic standing.

The scariest part about this list is that there are very high chances that either you or someone in your family (maybe even more than one) has at least one of these factors inherent in their lifestyle.

High sugar intake, surging consumption of nutrient-less junk food oozing with trans fats, endless smoking of cigarettes pack after pack, and spending decades of your life glued to a chair. It is not the pernicious spread of a West African virus that is a bigger health risk posing the human race. It is the subtle ubiquity of these lethal risk factors in our day to day living that is a much more significant and brutal element pushing the global population to the brink of major health breakdown.

These 5 global mortality risk factors are responsible (or at least partly linked) to the diseases which cause the most number of global deaths annually. 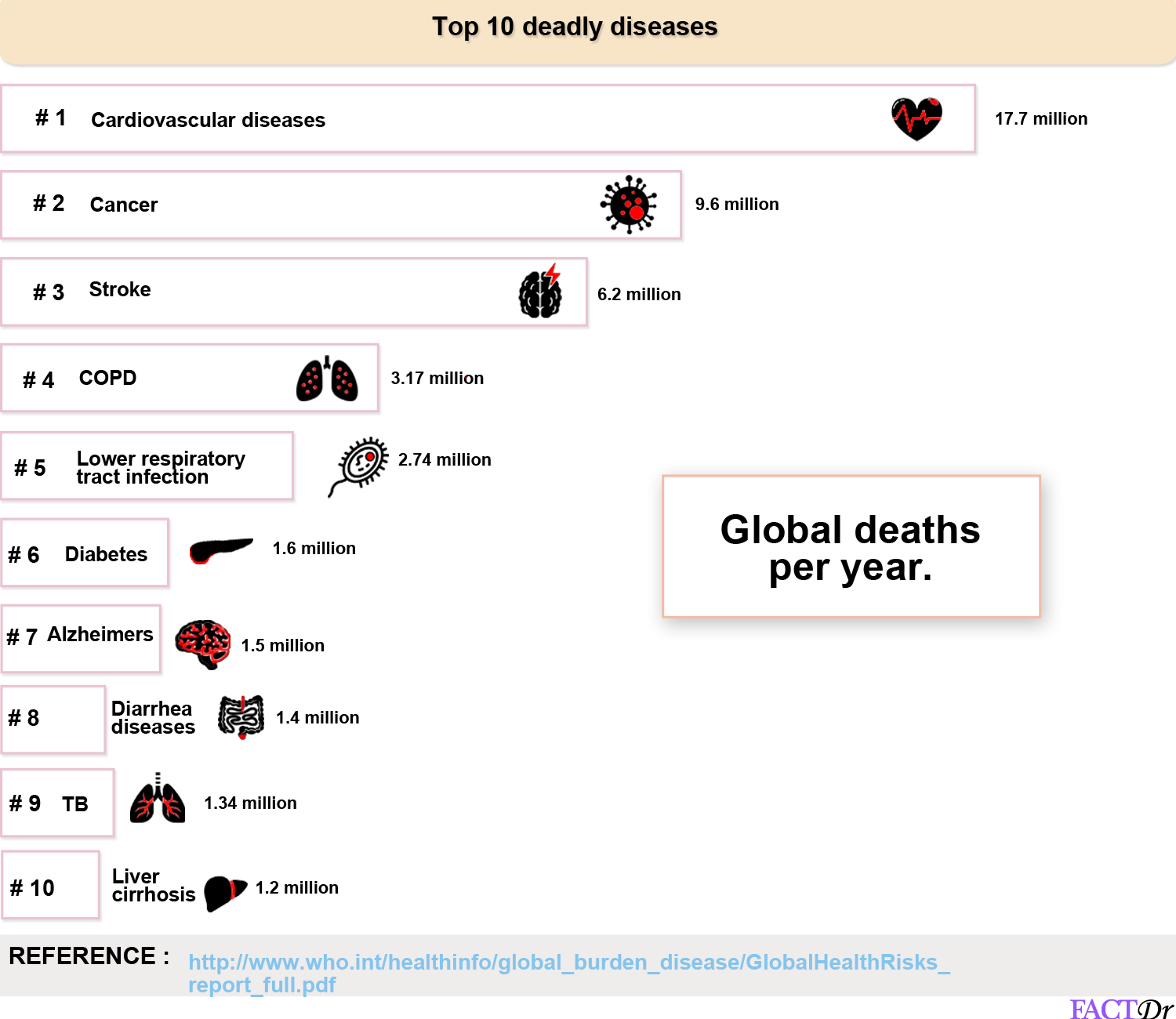 Cancer: A by-product of environmental pollution or our own toxic habits?

WHO states that almost half of all deaths caused by cancer worldwide can be boiled down to nine environmental and behavioral risk factors, in addition to seven infectious agents.The fact that tobacco smoke is the number one cause of lung cancer is a no-brainer.

Tobacco smoking is responsible for 71% of deaths due to lung cancer and 18% of all deaths in developed countries. This stands as the most preventable cause of cancer-related deaths.n addition to these, several other carcinogenic lifestyle patterns include:

While toxic lifestyle habit such as tobacco smoking, high consumption of processed meats (colorectal cancer), and high alcohol consumption (liver cancer) is under an individual’s control, certain environmental factors which expose people to carcinogens, could be well out of reach.

And then there are these carcinogenic elements too:

The widespread presence of these toxic agents has significantly contributed to the onset of the 5 most deadly types of cancer globally which are:

There is a significant difference in the lifestyle and dietary patterns of developed countries (USA) and the low and middle-income countries.Thus, the top 5 types of cancers with the highest mortalities in the USA are slightly different from the global scenario. In the USA, while the top 2 largest killers are still lung and colorectal cancer, the next 3 in the list are: 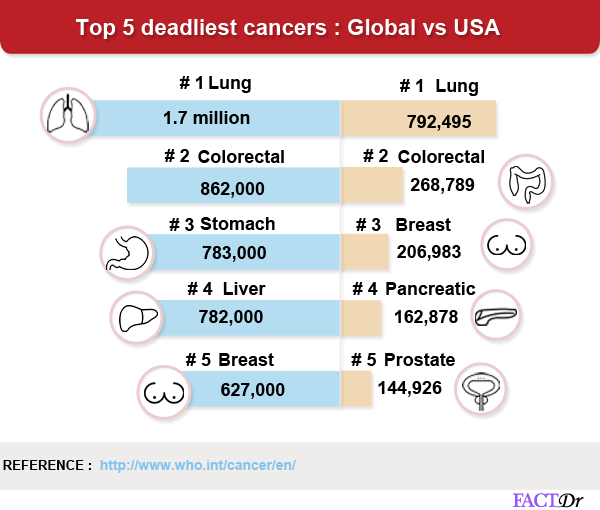 Battling global infections: Can money be the biggest weapon against pathogens?

Parasitic and infectious diseases were responsible for more than 8.7 million deaths worldwide (2012 reports).  A major burden of these mortalities falls on low and middle-income countries every year.Under-5 children deaths, mostly owing to diarrhea and pneumonia, constitute a large percentage of these mortalities.

It is an undisputed fact that poverty-ridden social and economic conditions have a colossal impact on the health and overall well being of the population.Lack of food, shelter, and access to clean water – these are the major factors at play when you consider widespread epidemics and clustering of chronic conditions.

In low-income countries, only a quarter of the population lives until the age of 70. 33% of all deaths in these nations are among children under the age of 14. Infectious diseases such as HIV, malaria, TB, diarrheal diseases claim more lives than cardiovascular diseases.

The opposite trend is observed in developed nations. As per a 2002 report, 98% of all under-5 child deaths occurred in low and middle-income countries. In these countries, the chances of catching hospital-acquired infections are almost 2-3 times that of in case of developed nations.

Neonatal infection risk can be as high as 3 to 20 times more than that observed in high-income countries. As many as 1 billion people residing in these nations do not have access to clean drinking water and basic sanitation.The major reasons as to why these harrowing discrepancies exist are:

Though the presence of infectious diseases is spread throughout the world, it is the low and middle-income countries that have tobear the burden of these infections.

Some of the most commonly occurring infections at the global level are: 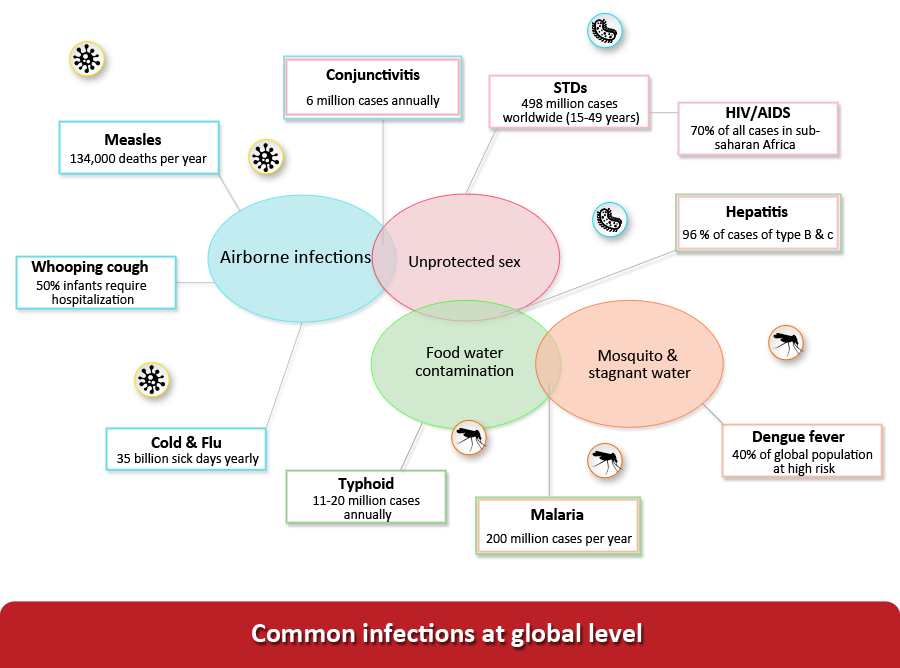 DALYs: Do these provide an accurate picture of global health scenario?

How disabling are these common and widespread conditions of the vital organs?

DALYs or Disability Adjusted Life Years is a tool used to measure the quality of life and the overall burden of a disease. It is defined as the number of years lost owing to a disease – it is the summation of years of life lost (YLL) prematurely and years lost due to disability.

This technique is useful because mortality doesn’t provide the complete picture of the burden of a disease. There are many diseases which don’t have a high mortality rate, however, are chronic and decrease the quality of life of the individual.

Take, for example, asthma. The number of deaths per year due to asthma is close to 383,000. However, there are more than 235 million patients of this disease, the majority of who are kids and teens.

This disease can heavily restrict one’s ability to perform physical activities and bring down the overall productivity. Thus measuring the burden of the disease only by its mortality rate or overall mortality might not give a very clear picture. In the year 2000, almost half of the global DALYs (43%) were associated with communicable, maternal, neonatal, and nutritional diseases.

By the year 2016, this figure fell down to 29%. This is indicative of the fact that not only the mortalities associated with these diseases were successfully brought down but also that the disability caused by each also decreased significantly.

DALYs also provide a clear picture of how different geographical and economic regions bear disease burden of different types. For example, the European countries are more associated with non-communicable diseases – 80% of the total DALYs in this region are due to such diseases which include cardiovascular diseases, hypertension, diabetes etc.

DALYs are an excellent tool in deciphering the relative danger or health risk posed by certain lifestyle and dietary factors too. For instance, 4.1% of the entire global DALYs can be attributed to tobacco use. This translates to 59.1 million DALYs worldwide due to the consumption of this single toxic entity.

The following are some of the commonly prevalent conditions that have comparatively high DALYs, largely chronic and restrictive in nature: 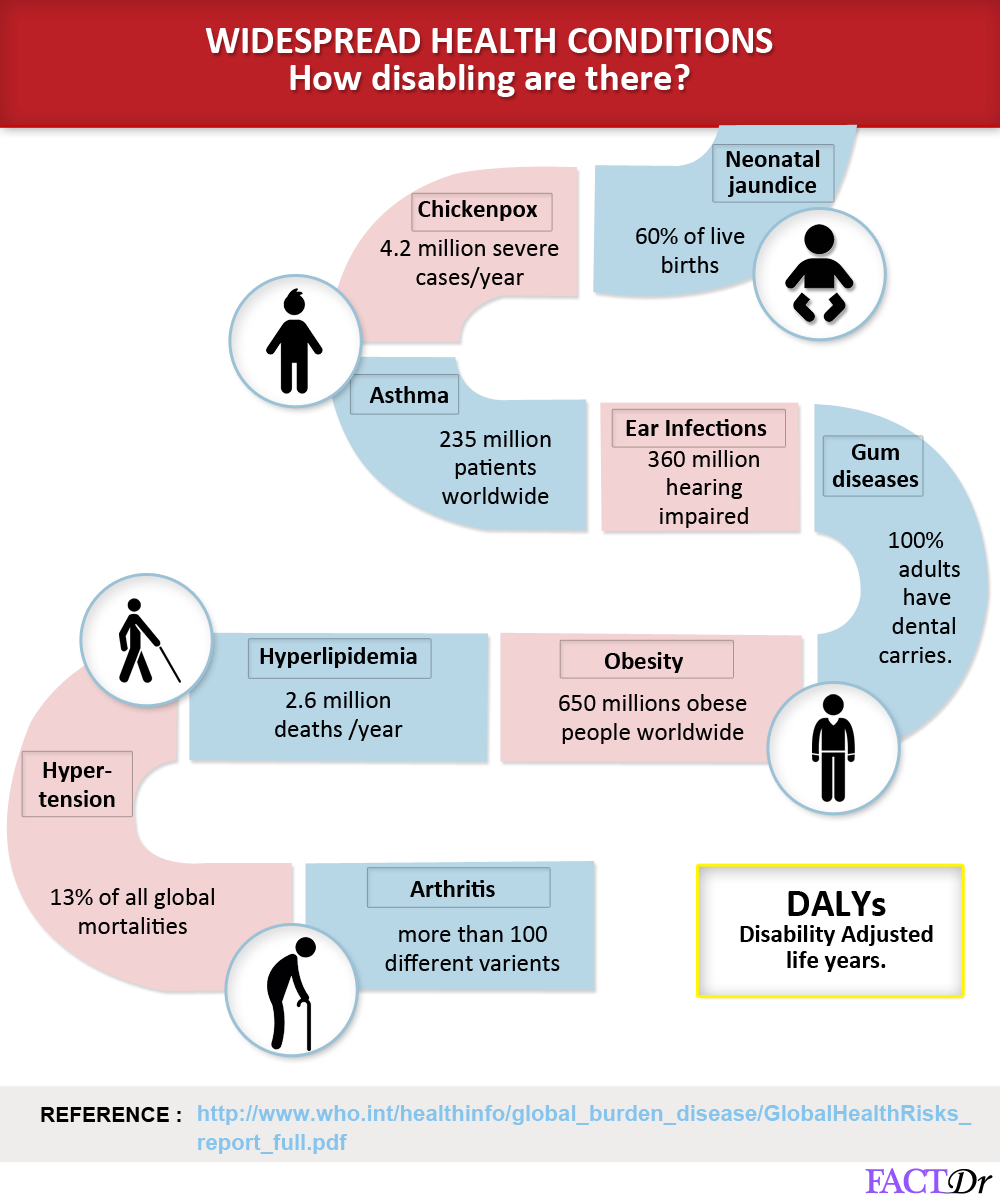 In addition to these diseases, the following are some of the most widespread conditions of affecting the vital organs/ organ systems of the body- brain, heart, liver, kidneys, lungs, endocrine system, and blood – that have high DALYs 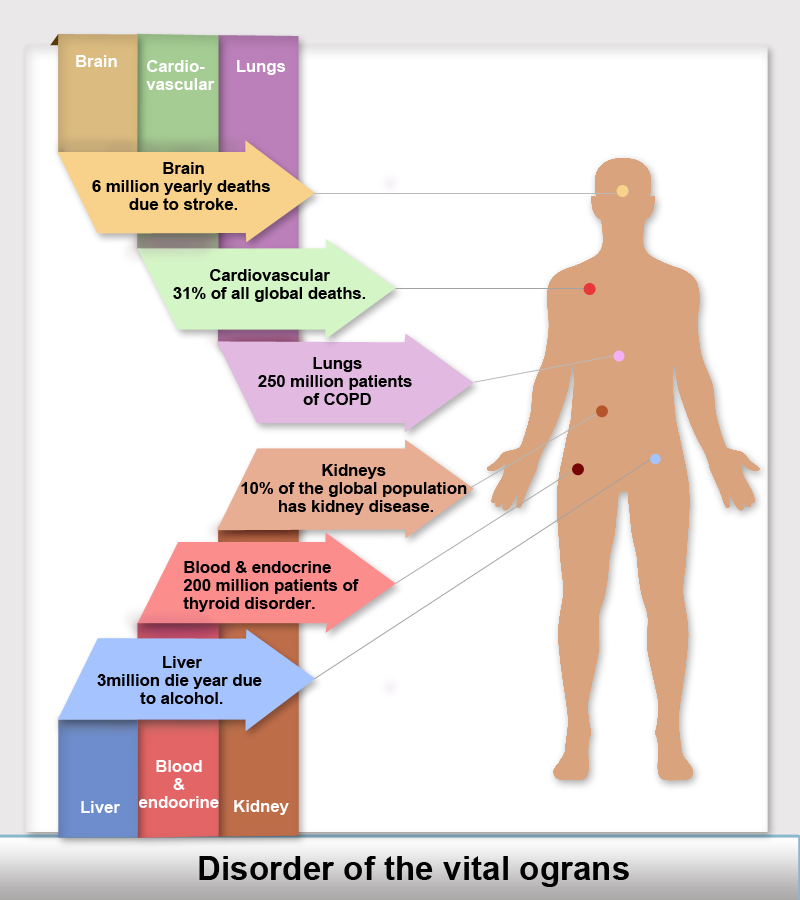