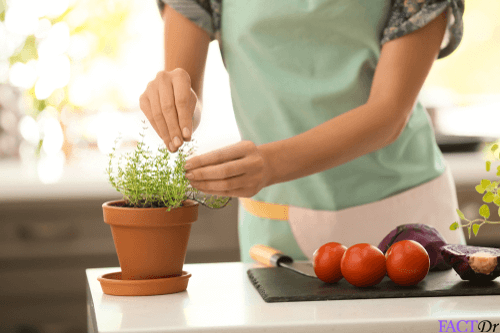 Time for some thyme

Thyme is a perennial shrub with the color of the flowers ranging from light purple to pink. It is very aromatic and has a pleasant yet pungent flavor. There are a number of varieties of thyme. Some of them, particularly the English Thyme, are used in cooking.

A brief history of thyme

Thyme is not a herb that was hidden away in the darkness and foraged by science. In fact, it is something that was never forgotten through the times. In ancient times, the Egyptians used thyme in the process of embalming. The Romans exchanged sprigs of thyme as a mark of respect. 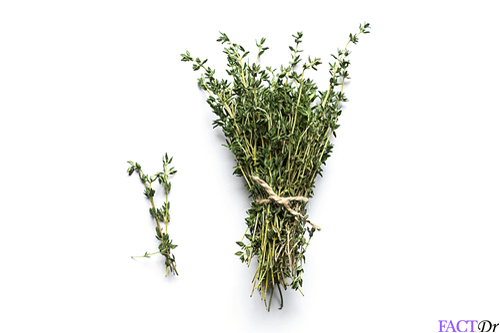 They also thought that eating thyme before or during a meal would act as an antidote to some poisons. This made it especially popular among Roman emperors. Thyme was also often given to Roman soldiers upon their leaving for battle, as a sign of courage.

They even used it as a mark of bidding farewell, as it was used in England in later times. It has been used in cooking in England as far back as the 4th century AD. It was also used to protect people from the Black Death, the bubonic plague outbreak in Europe in the 14th Century. The Black Death is said to have killed 50 million people then, which was 60% of Europe’s population at the time. It has been used medicinally to treat epilepsy, melancholy, and as an antiseptic in World War I.

All in good thyme: The benefits of thyme

A study conducted in rats found that the use of a thyme extract helped lower the heart rate and blood pressure in them. The cholesterol levels were also lowered. In another study conducted on Japanese quail, thyme oil was able to reduce the levels of serum lipids. Thyme oil also helped increase the absorption of nutrients in the intestine and lowered the necessary feed intake. This will again help lower cholesterol levels.

Thyme extracts have been used in the treatment of cough for centuries. One study, however, showed that an extract of ivy and thyme is more effective as a remedy for cough than thyme alone. It was also found to be helpful in treating acute bronchitis as well. Thyme-based preparations are recommended as expectorants under current European guidelines.

A number of studies using well-known, proprietary herbal medications were conducted for the treatment of cough. These used thyme or a combination of thyme and ivy or thyme and primrose and bore excellent results. The use of these herb extracts not only reduced the frequency and severity of the cough but also increased secretolysis. Secretolysis makes the sputum thinner and less viscous, and therefore easily removable by coughing. This means that thyme tea may be beneficial when you have a bad cough. 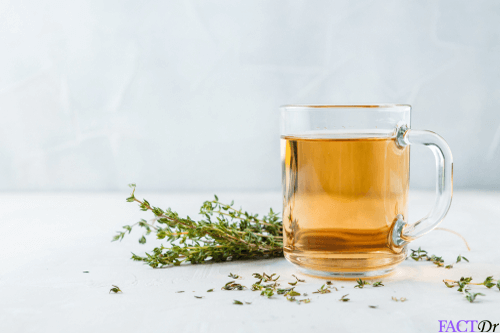 Your body needs a number of vitamins and minerals to maintain bodily functions. Since thyme contains both vitamin A and vitamin C, adding it to your diet can make up for the deficiency of these vitamins. Vitamin C boosts your immunity, and so thyme is useful in fighting cold and mild infections.

Thyme is rich in minerals such as iron, copper, and manganese, which is another reason why it should be a part of your diet. Thyme also provides necessary fiber for the body.

Used as a disinfectant

Mold grows on decaying plant or animal matter. They release spores into the air to reproduce. These spores cause air pollution and allergic reactions and can be a cause of coughing, wheezing, and headaches. Thyme oil may prove useful for a moderate or mild case of mold damage in your environment as it has many antifungal properties. In addition to antifungal properties, thyme oil has antibacterial properties as well.

One of the active substances in thyme is carvacrol. Its aroma has been proven to induce favorable changes in a person’s mood and is therefore used in therapy. According to a 2013 study, carvacrol helps in such a mood change by improving the activity of neurons. Therefore, the regular use of thyme or thyme oil could have a soothing and positive effect on one’s mood.

Helps get rid of pests

Many pesticides based on thyme are used both indoors and outdoors to repel common pests. Thyme leaves have been burnt in a campfire traditionally to keep insects away.

A recent study proved that a combination of thymol, alpha-terpinene, and carvacrol is effective in killing off tiger mosquito larvae. The tiger mosquito is the cause of several diseases such as dengue, chikungunya, and Yellow Fever. Though some believe that growing thyme in your garden is enough to keep mosquitoes away, this is not true.

A study investigated the effectiveness of essential oils from various aromatic herbs including thyme, rosemary, lavender, etc. in treating hair loss. Eighty-six patients with this medical condition were divided into two groups. Each person in the first group applied the essential oil with a carrier oil while those in the second group only used the carrier oil. Those in the first group showed decreased hair loss as compared to those in the second group. 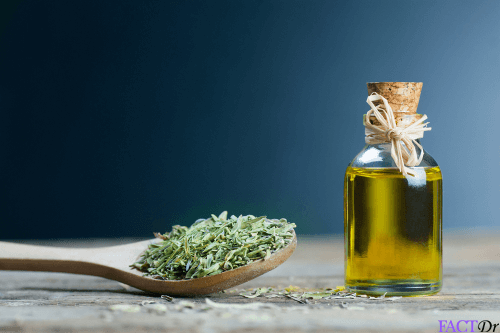 Thyme is popular for its deodorizing effect. Thyme is an active ingredient in many deodorants and fragrances. It also included in potpourri. A study shows that terpenes are the major aroma-active components in wild thyme, with thymol being the most important contributor. Thymol is also the terpene that gives thyme its characteristic odor, according to the study. Terpenes are a large group of volatile, unsaturated hydrocarbons found in the essential oils of plants, conifers, etc.

The skin is exposed to stress factors in the environment such as pollution and UV radiation. The aggressive oxidants produced by such pollutants can damage the skin cell membranes. Thyme extract is now used in many organic skin care products due to its proven antioxidative action. Benzoyl peroxide is the active ingredient in most acne creams and washes. The antibacterial effect of a thyme tincture also proved stronger than that of standard concentrations of Benzoyl peroxide. The latter also causes a burning sensation on the skin while a thyme tincture does not.

Because of its antibacterial properties, thyme extract is also used in mouthwashes. It has nearly 81.5% of the same bacterial action as a commercial non-organic mouthwash containing menthol. The mouthwashes containing organic compounds in the study had only trace amounts of menthol, primarily used as a flavoring agent.

The only drawback is the mouthwash containing thyme oil, according to the study was oral stinging. Commercial mouthwashes, on the other hand, have several drawbacks such as enamel staining, burning sensations, and changes in taste perceptions.

A 2011 study also concluded that an essential oil mouthwash helps in reducing gum inflammation caused by gingivitis. If you swallow a mouthwash containing essential oils, please consult a doctor. Essential oils are not meant to be swallowed.

As a culinary ingredient

Thyme is an ingredient widely used in Mediterranean cuisine. It is also popular in England as a condiment. Thyme can be added to pesto sauce along with other ingredients like lemon and basil to give the sauce a slightly different taste. Fresh thyme leaves can be crushed and added to preparations of chicken and other meats or even fish. You could also update the familiar recipe of macaroni and cheese by adding some mushrooms and thyme to give it a slightly different taste.

A little too much thyme: Safety and side effects of thyme

Thyme is generally safe when consumed as a seasoning in food in small amounts. When thyme is taken as medicine for short periods, it might be safe for the individual. In some people, however, it can cause headache, dizziness, and stomach upsets.

When applied to the skin, thyme oil is probably safe. In some people, the application of thyme oil can cause irritation. There is also not enough evidence to prove that the ingestion of thyme oil by mouth is safe.

Thyme could be consumed by children in normal food amounts. Even when taken as medicine for short periods by children, it is safe. There is not enough research to conclude on the safety of taking thyme oil by mouth or applying it to the skin in the long term.

If you are allergic to oregano or other herbs of the family of plants called Lamicae, you may be allergic to thyme also. In such cases, avoid its use in cooking.

Thyme is also known to slow the process of blood clotting. Taking thyme with other anticoagulants like aspirin may increase the bleeding in some cases. This is especially the case when thyme is taken in large quantities. It is recommended that one stops using thyme before surgery. This is because it might slow blood clotting and therefore increase the risk of bleeding before and after the surgery.

Thyme works much like estrogen, in the body. If you have any known conditions that could be made worse by estrogen, do not use thyme. Conditions made worse by thyme are breast cancer, uterine cancer, ovarian cancer, and endometriosis. Endometriosis is a disorder in which the tissue that lines the inside of the uterus grows outside it.

Thyme and thyme again: How good is it?

Thyme extracts, particularly those containing thymol, have been proven by studies to have a wide range of benefits. It can be ingested as a herbal supplement, be used in food as a seasoning, and be applied on the skin as a cream. Probably no other herb has such a wide array of benefits and can also be consumed in so many different ways as thyme can be. It almost seems like almost everyone would find a use for it. Yet, it is not without its own share of side effects. Some of them could be quite serious.

This happens, though, only when it is consumed in large quantities. It is also probably not safe for use by children and by breastfeeding or pregnant women. It must also be stopped two weeks before a surgical procedure since it slows down blood clotting and can increase the risk of bleeding. This goes to show that even natural remedies, much like synthetic drugs, must be used only as recommended by a healthcare practitioner.