Pumpkin Seeds: Why pumpkins are more than just for pies! 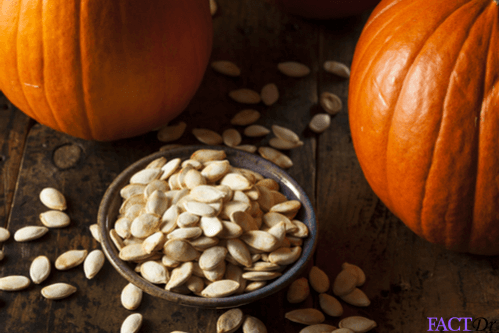 Home » Nutrition » Pumpkin Seeds: Why pumpkins are more than just for pies!

Pumpkin Seeds for a healthy snack

Pumpkin seeds or ‘Pepita’ from the Mexican Spanish, ‘Pepita de calabaza’ are crunchy goto handfuls, that can rev up any meal from a breakfast, a mid-morning snack, a tea time bite or a pre-dinner munch. Although, many may prefer pumpkin seeds as a breakfast starter, these innocuous looking titbits have made their way into power packed menus and diets.

Pumpkin seeds are also called the ‘little seeds of squash’. They are light green in colour, oval and flat in appearance and have a white outer hull. These seeds are rather weightless but can prove their weight in gold for their nutritional value.

Pump up on facts

With pumpkin seeds gaining ground as a health super food, it is time to know vital details about pumpkins.

What is a Pumpkin?

For the uninitiated, pumpkin is a type of squash and a fruit of the pumpkin vine. Pumpkins are part of the ‘Cucurbita’ family that includes cucumbers and squash. There are many varieties of the pumpkin which come in myriad sizes, shape, and color. The seeds and flowers of all varieties of pumpkins are edible.

Pumpkins contain 90% water. They are also rich in potassium and Vitamin A. Dating back to colonial times, Native Americans used pumpkins in rather interesting ways. They used pumpkins as medicine and food.
The crust for the pies was made using pumpkins. Pumpkins were found to be a quick and easy remedy for snake bites. Further, the ubiquitous fruit was also used to treat freckles.

Pumpkins are thought to have originated as early as 5500 B.C. in North America. Indigenous specious of the plant are found across South, and Central America as well. Now, the humble pumpkin is grown almost in every continent with the exception of Antarctica. According to recent statistics, the United States, India, Egypt, Mexico, Ukraine and China rank as top producers of pumpkin in the world.

Origin of the Name

The word pumpkin interestingly is derived from a Greek word, ‘Pepon’, which means large melon. Later the French left their stamp on the pumpkin by changing the name slightly to “pompon.” The English wanted to have a slice of the pie themselves, so they changed the name to ‘pumpion’.American colonists had the last word, and they modified the name to the present “pumpkin”. 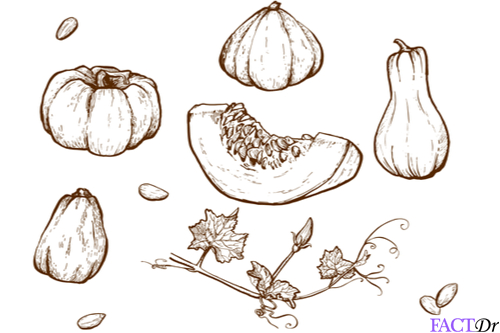 There are innumerable types of pumpkins in different colors, sizes, and shapes. There is an interesting statistic that points to the largest pumpkin in the world that weighed about 1,140 pounds.
Pumpkins have been categorized according to their size.

From the time of its discovery, pumpkins have been used in soups and stews. This all-time fruit soon became a diet staple. Reportedly, pumpkins were cut into long strips and roasted on the fire after which it was eaten. Some of them dried strips of pumpkin and wove them into mats.

The famous pumpkin pie also has a story behind it. It is believed that the colonists cut off the top portion of the pumpkin and deseeded the bottom part. The cup was filled with spices, milk, and honey and baked to make a tasty pie.

Beneficial calories are a great take away from pumpkin seeds. The modest seeds bring value to the table, largely attributed to its nutrient-rich composition.

The seeds can be eaten with or without their shell. Tryptophan, manganese, and magnesium are found abundantly in pumpkin seeds. Not only that, but the seeds are also endowed with protein and phosphorus.

No exaggeration that nearly 25% of the daily needs of iron and protein can be derived after eating a quarter cup of pumpkin seeds. The seeds have elevated levels of monosaturated fat and are an important anti-inflammatory agent.

A 100-gram serving of roasted, in-shell pumpkin seeds provides 536 calories. The nutritional break up is as follows: 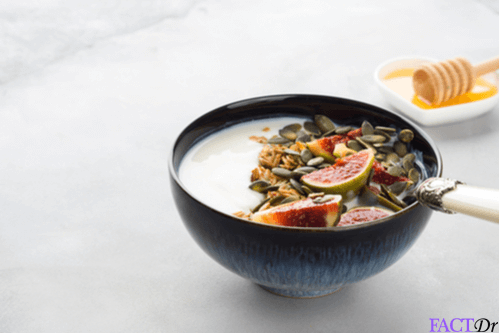 Pumpkin seeds are mostly eaten with their shells. They taste better when they are roasted as the shells give a crunchy taste to the seed. The most nutritive way to eat pumpkin seeds is to have them raw, to assimilate the best of the healthy fats present in the seeds.

The seeds can be toasted or roasted. The pumpkin seeds can be made flavourful by adding rock salt, pepper, chili or cumin. Honey and brown sugar combination on the roasted seeds lends a completely different flavor.

Starting the day with a handful of pumpkin seeds can set a healthy tone for the day. For those who skip eating the seeds in the morning can consume it as an in-between meal snack.

Pumpkin seeds are loaded with goodies. In a nutshell, these seeds are heart protective as well as reduce the risk of certain cancers.

As with all foods, pumpkin seeds need to be consumed in moderation. Consuming too many of these seeds can cause stomach discomfort due to bloating and gas. More than a handful can be eaten without the fear of side effects. Eating these seeds excessively can also cause constipation.

There appears to be a link between the consumption of pumpkin seeds and a reduction in blood sugar levels. Although few insights have pointed towards the benefit of pumpkin seeds on diabetics, there is no conclusive evidence yet. A detailed study is required to establish this connection.

There is more to pumpkin seeds than what meets the eye! These tiny seeds are a nutritional powerhouse that brings on a host of health benefits. Size does not matter and pumpkin seeds have proved it beyond doubt.