Himalayan salt lamps: Do you want to bask in the pink glow of health? 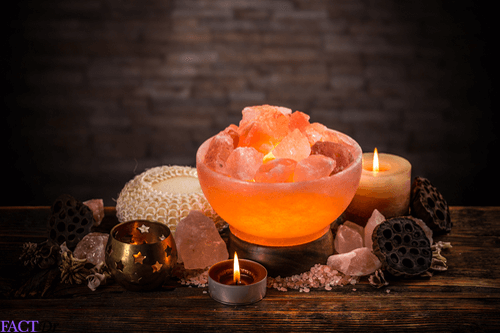 Home » Healthy living » Himalayan salt lamps: Do you want to bask in the pink glow of health?

Things you didn’t know about the Himalayan sea salt

Did you know that the towering icy peaks of the Himalayas actually contain traces of the original, primal seas dating back to 100-200 million years?Claimed by many as the “purest salt” available to humankind, the Himalayan sea salt could be the dried up remnant of these seas that existed during earth’s creation.

The Himalayan sea salt has a characteristic pink hue which is believed to be lent by a common pink microorganism that inhabited the seas millions of years ago. So why is this ancient deposit of the Cretaceous era gaining sudden popularity among health enthusiasts and marketers worldwide?

It is because recent studies have opened up a whole new world of holistic wellness associated with this prehistoric entity. 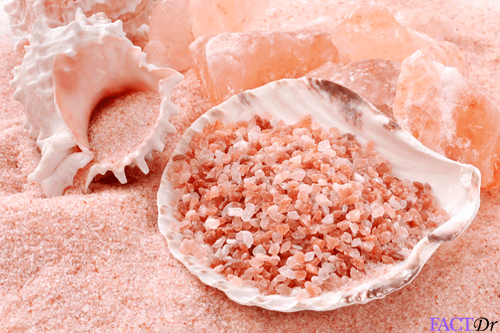 The Himalayan sea salt, popularly called as “pink gold”, is one of the few substances on the earth that contain traces of all the 84 elements found in the human body!

This means that Himalayan sea salt can actually heal and nurture your body and mind. Right from regulating your body’s electrolytic balance to promoting digestion, pH balance, and bone strength – this simple ingredient can do it all.Substituting table salt with Himalayan salt can boost immunity, muscle mass, sleeping patterns, and even increase your libido.

But here is the catch.

You needn’t add this miracle salt in your grocery list to reap the innumerable health benefits. You can also use blocks of the salt as soothing lamps. Yes, you heard it right.

Himalayan salt lamps: how does a lamp made out of salt work

How do these affect our bodies?

Well according to scientists, negative ions are good for your body. 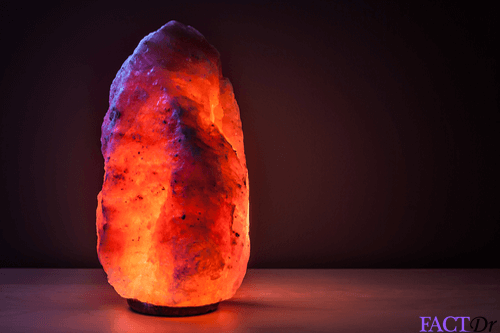 These are found abundantly in places such as waterfalls, beaches, and other large moving-water bodies and even in the fresh mountain air.

When inhaled, these ions are supposed to trigger positive biochemical changes within the body that mitigate mental stress, relieve depression, and result in improved energy levels (no wonder we feel so good after an outing to our to the hills or the seas). Himalayan salt lamps, extracted from the very heart of such refreshing peaks, are believed to emit negative ions into the atmosphere.

The surreal pinkish-orange glow emanates health-boosting negative ions into the surrounding area, thus neutralizing the havoc raged on our bodies by pollution and electrosmog caused by gadgets. Now coming down to the term hygroscopic. Anything that attracts and absorbs water is a hygroscopic material. Himalayan sea salt is one such substance.

It is said that when you light a Himalayan salt lamp, it attracts the moisture in the air towards itself. And with the moisture, it also pulls the impurities present in the air towards itself. These impurities could be anything – dust, smoke particle, molds, bacteria, and other allergens. Once these particles reach the lamp, they remain stuck there purifying the air that you breathe.

So, in a nutshell, Himalayan salt lamps bestow us with negative ions and cleanse the very air we breathe. Now let us get down to analyzing how negative ions and germ-free air can heal your body and mind holistically.

Himalayan salt lamps: keeping you in the pinkest of health

Lamps that make you happier

Studies reveal that the pink hue from the Himalayan salt lamp, rich in negative ions, has a positive effect on your body’s serotonin level. What is serotonin, you ask? Well, these are the chemicals secreted associated with feelings of happiness and well-being. Not only that, serotonin levels are also known to regulate digestion, sleep, mood, memory, and libido.  These can also counter the effects of depression. 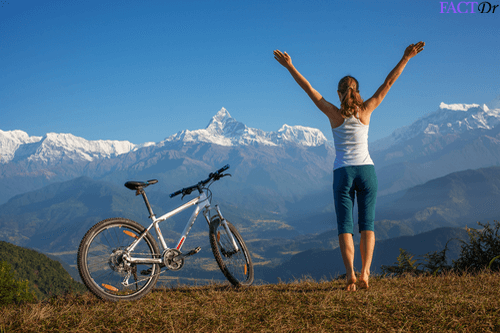 Aptly described as nature’s anti-depressant, a Himalayan salt lamp is a sturdy shield your body needs to protect itself from the crippling effects of positive ions.

These positive ions are produced in abundance by electronic gadgets that make up most of your surroundings.  Blue light emitted from laptops, phones, and televisions are detrimental to your physical and mental health.

These mess up with your body’s natural melatonin production and cause sleeplessness, irritability, and agitation. However, a Himalayan salt lamp is an emitter of negative ions and thus the relaxing pink glow can actually improve your mood and make you feel more positive.

Sleep all your troubles away 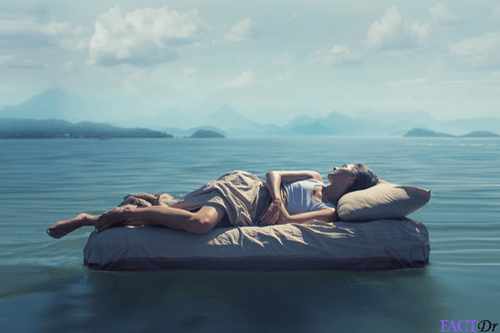 Artificial light is one of the biggest disrupters of natural sleep. As mentioned before, the blue light phenomenon disturbs your body’s circadian rhythm (your biological clock) and leads to poor quality of sleep.

With serotonin and melatonin oozing from your brain in the presence of the warm glow of the lamp, it is only natural that all your important bodily cycles will fall back into the routine, sleep is one of them. Regular users of the Himalayan salt lamp have shown signs of improved sleep over an extended period of time. And who here doesn’t know the many benefits of getting a good night’s sleep?

You must be aware of the fact that salt is hygroscopic by nature and as such, is able to attract water molecules towards it. Water molecules also carry air pollutants such as allergens, bacteria, and mold with them.

When these water molecules reach the salt lamp they get stuck in the lamp, helping to purify the indoor air. As the lamp remains heated due to the lamp, it gradually dries up and the cycle of attracting water molecules continues.

Thus, this rock-solid gift of nature can help you cleanse your air and, in turn, keep you away from airborne toxins and allergies.

Shielding you from electromagnetic radiations

Many of the electronic devices we use are known to release electromagnetic radiation. These are in the form of positive ions emitted by televisions, computer, and mobile phones. These radiations are known to have negative health effects such as weakening of the immune system, increased stress levels, and fatigue.

Moreover, even a prolonged low-level exposure to radiation can result in problems such as cancers, impaired immunity, dementia, and aggravate Alzheimer’s disease.Negative ions emitted by Himalayan salt lamps can negate the harmful effects of positive ions and prove to be beneficial for your overall health. 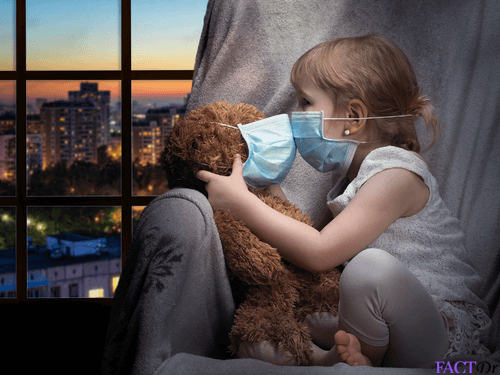 The air we breathe in filled with particulate matter – be it from the exhaust of automobiles or the smoke from cigarettes.

The rate in which these toxins are poisoning the clean air, it is hardly a surprise that a majority of us are today vulnerable to respiratory disorders. Since Himalayan salt lamps can effectively filter your air and remove impurities such as pollen and dust, these can be quite beneficial for people prone to allergies. And the same goes for people suffering from chronic asthma or other respiratory disorders such as sinusitis.

May ease problem of coughing

Positive ions are generated in our homes, mostly by electronic gadgets. When we breathe more of these positive ions, it can make the microscopic hairs in our windpipe turn sluggish. In this state, they are not able to block the contaminants out of the lungs.

The Himalayan salt lamps are able to absorb water out of indoor air and at the same time they also take out positive ions from the air. The salt lamp also expels negative ions, which in turn improve air quality. These negative ions improve the activity of microscopic hairs and keep the lungs clear.

Relaxing the glow of the salt

The salt lamps can be utilized to aid color therapy.

It is an alternative diagnosis and treatment technique that can be used for different illnesses.

The soft light produced by the salt lamp is in hues of ambient yellow, orange, and red. Such soft light may help in relieving stress, provide relaxation, and be beneficial in attention deficit disorder. The serene light released by the Himalayan salt lamp can also help in balancing spiritual, physical, and emotional energies.

Be it your workload, exams, relationships, or life in general- there is no dearth of things that could put your body in a stressful state. When we are stressed, the adrenal glands release the hormone cortisol. This hormone promotes premature aging and increases the risk of chronic illnesses. And adding to the long list of things that are harbingers of stress in your life, positive ions also can have the same debilitating effect on your mind.

When you light a Himalayan salt lamp, you release a burst of negative ions in your surroundings. The same feel-good negative ions that make you feel happy and alive atop a hill or next to a bumbling brook. And thus this simple lamp can help you in getting rid of one of the most lethal enemies of the human mind and body – stress.

Safe for the environment

Research indicates that currently there are more than 35 million tons of Himalayan sea salt reserves in the Khewra region, in addition to the 47 million tons that remains trapped in pillars. This indicates that keeping in mind the rate of extraction, the reserves will last for over 350 years. Additionally, the wattage of the light fixture mounted inside the lamp is usually quite less. One can also use this lamp by burning candle instead of using a bulb.

Deciding on a Himalayan salt lamp to buy

If you have an average sized bedroom, a lamp with a capacity of 5-8 lbs should suffice. However, you can opt for a larger, 10-15 lbs, lamp in case you require it for a larger living space. The basic formula goes like this.

For 1 lb of bulb capacity, you can attain therapeutic effects for an area as large as 16 square feet (4’X4’).A Himalayan salt lamp is the closest you can come to having your own personal source of natural and health-boosting illumination.The unique blend of trace minerals trapped within the crystals of this primordial salt block is nothing short of a miracle.

Brimming with healthy goodness, a Himalayan salt lamp can supplement your everyday living with a touch of healthy glow. The glow of nature that your body needs in this day and age of pollution, stress, and toxins.