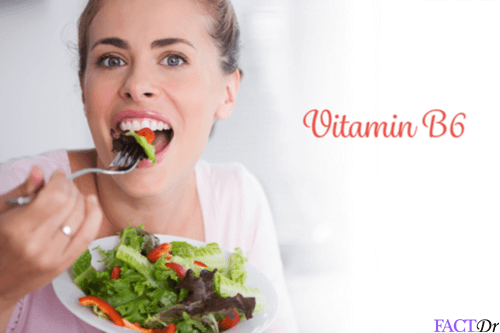 Vitamin B6 deficiency: What you need to know

Vitamin B6 is a water-soluble vitamin that is found in three different forms. These are pyridoxine, pyridoxamine, and pyridoxal, and they are all normally found in foods. 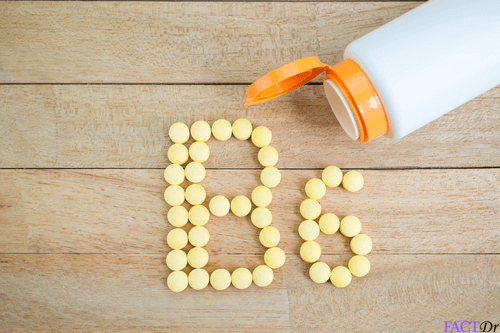 Vitamin B6 is necessary for healthy brain function. Vitamin B6 helps in the neuron transmission to the brain. Researchers from Oxford University in England noted that taking high doses of B vitamins each day was beneficial for older people with mild cognitive impairment. The rate at which their brains shrank went down by 50%, reducing the risk of dementia.

It is also necessary for the normal functioning of digestive enzymes that assist in breaking down food. It is very important for processing the proteins in the food you eat.

Vitamin B6 also helps the body make melatonin, which helps regulate your body’s internal clock and provides you with a good night’s sleep.

Women use vitamin B6 to combat stress and depression post pregnancy. They also help with symptoms related to menopause.

It also assists in the production of red blood cells. Studies have proven that this vitamin might also help to protect against pollution. With over 92% of the population living in areas where the pollution is over WHO recommended limit of 10 µmg/m3, this discovery could be crucial. It could help protect people from diseases that are triggered by environmental or manmade factors.

Daily Dosage of Vitamin B6

Most people who eat a well-balanced, varied diet will get the required amount of vitamin B6 without having to take dietary supplements. However, if your diet tends to be scarce on protein, you may want to pay attention to how much B6 you are getting. A number of factors will affect a person’s daily requirement for vitamin B6, because it affects several aspects of metabolism. The effect on protein intake has been widely studied.

People who are on high-protein diets may need to take more vitamin B6. They should speak to their doctor. In addition, the requirement of vitamin B6 changes as you age. The exact amount of B6 vitamin you need every day depends on your age, gender, and any special circumstances. Special circumstances could be conditions such as being pregnant or breastfeeding.

Risk factors for vitamin B6 deficiency

People with impaired renal function like end-stage renal disease or chronic renal insufficiency have lower levels of vitamin B6. Those receiving maintenance kidney dialysis or intermittent peritoneal dialysis also have low levels of Plasma pyridoxal phosphate (PLP). It is also low in people who have undergone a kidney transplant. This is probably because of the increased metabolic clearance of PLP.  Patients with kidney disease often show clinical symptoms similar to those of people with vitamin B6 deficiency. The symptoms of kidney disease are also very similar to that of a vitamin B6 deficiency. 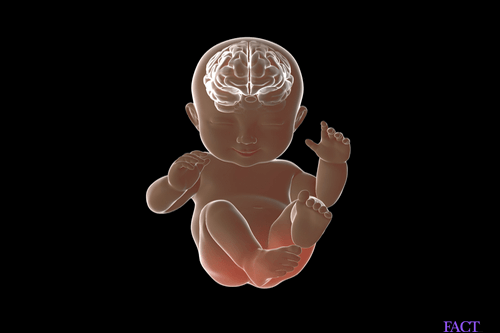 People who regularly consume alcohol have low PLP concentration. Hence, there is low vitamin B6 as well. Alcohol produces acetaldehyde. This reduces the net PLP formed by the cells and competes with PLP in protein binding. This means that the PLP in cells might be susceptible to hydrolysis by membrane-bound phosphatase. Pyridoxine supplementation might help those who are suffering from vitamin B6 deficiency because of alcohol dependence.

Signs and Symptoms of Vitamin B6 deficiency

Vitamin B6 deficiency is one cause of a red, itchy rash called seborrheic dermatitis. It generally appears on your face, neck, scalp, and upper chest. It has an oily, flaky appearance, and may cause white patches or swelling.

Vitamin B6 helps synthesize collagen, which actually rejuvenates the skin, keeping it healthy. Hence, its deficiency leads to a lack of collagen, which could be a reason for the rashes. Consuming B6 vitamin supplements help to clear up the rash quickly. People with seborrheic dermatitis need more vitamin B6. Application of a B6 face cream has helped improve the symptoms of seborrheic dermatitis.

Cheilosis, characterized by sore, red, and swollen lips and cracked corners of the mouth, is caused by a vitamin B6 deficiency. These affected areas may even bleed and get infected.

Having cracked or sore lips are not only painful, but it also makes talking and eating difficult. Eating foods rich in vitamin B6 will help resolve the deficiency of this vitamin. Notably, deficiencies of riboflavin, iron, folate, and other nutrients might also cause this condition. Other factors like sunny, dry, or windy weather also can cause this condition.

Your tongue may become sore, reddened, smooth, swollen, or inflamed if you a vitamin B6 deficiency. This is called glossitis. The tongue becomes glossy and smooth because of the loss of papillae. Papillae are the small bumps on your tongue. You may have a problem while talking or chewing if you have glossitis.

If you take enough of vitamin B6 supplements or vitamin B6-rich food, your tongue will return to its normal condition, provided that the deficiency of vitamin B6 was the cause. In fact, deficiency of other nutrients, such as folate and vitamin B12 can also lead to this condition. In such cases, the doctor would ask you to add these nutrients or supplements to your diet, thereby treating glossitis.

Shortage of Vitamin B6 could affect your mood, making it more likely to cause depression, anxiety, irritability, or even increased feelings of pain.

Vitamin B6 is involved in the synthesis of several neurotransmitters. Examples are serotonin and gamma-aminobutyric acid (GABA). Both of them help control anxiety, depression, and feelings of pain. Studies are currently testing the influence of B6 in combating behavioral problems associated with mental conditions.

In individuals with autism, vitamin B6 supplements helped reduce the chances of behavioral problems arising. This was probably because of its role in producing neurotransmitters. Studies also show that taking 50-80 mg of Vitamin B6 daily helps to reduce the symptoms of premenstrual syndrome (PMS). It does so by reducing depression, anxiety, moodiness, and irritability.

One possible way how this is accomplished by vitamin B6 is by producing serotonin. Serotonin improves a person’s mood. Scientists are still conducting studies to see if women who suffer from PMS may have other mineral and vitamin deficiencies. This would help treat them better.

An immune system that is functioning well helps to combat infections, inflammations, and various cancers. However, a nutrient deficiency such as that of vitamin B6 can disrupt the immune system.

A deficiency of vitamin B6 leads to a reduction in the number of antibodies produced to fight the infection. A B6 deficiency could also lead to a fall in the number of white blood cells, including T-cells. These cells regulate the immune function of the body, enabling it to respond appropriately to different conditions.

B6 vitamin also helps your body make a protein called interleukin-2, which helps direct the actions of red blood cells. People with autoimmune disorders can be affected by diseases which deplete the body of vitamin B6, thus increasing the requirement of vitamin B6 for such people.

A vitamin B6 deficiency also makes you unusually tired and weak. This is because vitamin B6 also helps make hemoglobin. This protein carries oxygen in your blood. When your cells do not get enough oxygen, because of a lack of hemoglobin, you will feel tired and weak. The resulting condition is called anemia.

You can buy either form of the supplement. Pyridoxine hydrochloride is more common and less expensive than PLP.

Tingling or pain in your hands and feet

Nerve damage, or neuropathy, can be a result of vitamin B6 deficiency.You may have burning, tingling, or shooting pain in your hands, arms, legs, and feet. Some describe it as pain similar to that induced by a needle or pinprick. It may also cause clumsiness, balance issues, or difficulty in walking.

Seizures happen for various reasons. One of them is a deficiency of vitamin B6.When you do not have enough of vitamin B6, the calming neurotransmitter GABA is not produced in sufficient amounts, which causes an overstimulation of the brain.

Seizures can cause rolling eyes, muscles spasms, and jerky movements. Sometimes this leads to convulsions or loss of consciousness. Various observations have been made of a deficiency of B6 causing seizures. These were first noted in the 1950s when babies were fed infant formula with insufficient B6.

However, seizures have been reported even in adults in recent times caused by a deficiency of vitamin B6. These were most commonly found in cases of pregnancy, alcoholism, interaction with medication, or liver disease.

Homocysteine is a byproduct formed during the digestion of proteins. A deficiency of vitamin B6, folate, or B12 can lead to abnormally high levels of homocysteine, as these vitamins help process homocysteine in the body.

Increased homocysteine could lead to several medical conditions, such as heart disease, Alzheimer’s, and stroke. It can also damage blood vessels and nerves. Your homocysteine levels can be measured by a simple blood test. They can be lowered by taking vitamin B6, vitamin B12, and folate supplements.

Foods rich in Vitamin B6 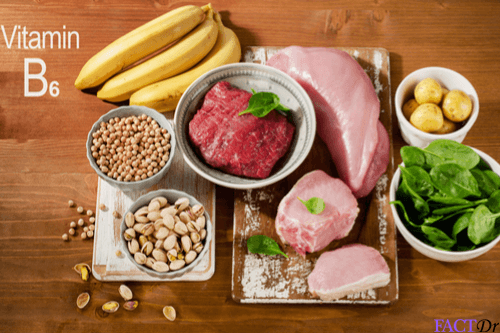 Your body cannot store vitamin B6 in large quantities. This means that you must consume foods containing vitamin B6 on a regular basis. This is generally not that hard to do because it is contained in many animal and plant foods. It is also added to several fortified foods that you get to buy.

Notably, the forms of vitamin B6 found in animal sources and fortified foods is more easily absorbed than those found in plant foods.

If you only eat plant foods, you may need to eat more of them to get the amount of vitamin B6 required by your body.

Sources of vitamin B6

The following are sources of vitamin B6:

Vitamin B6 is a very essential vitamin participating in over 100 reactions in your body. Its importance to the body cannot be overemphasized. The only way you can be sure that you are getting enough of vitamin B6 is by implementing a diet that contains it. If you consume only plant foods, make sure you consume more of them to ensure that you meet your recommended daily intake of vitamin B6. As the article’s title tells you, the deficiency of vitamin B6 is a great loss to the body, but one that is easily reversible.