Tomato: All you need to know about this juicy vegetable (or a berry?) 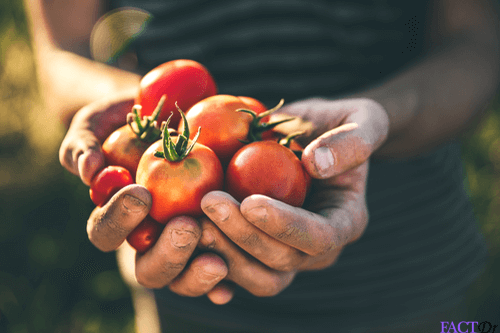 Home » Nutrition » Healthy Foods » Fruits » Tomato: All you need to know about this juicy vegetable (or a berry?)

Tomato: Fruit or a vegetable?

Tomato is known scientifically as Solanum lycopersicum.  Tomato is the berry of a plant from the nightshade family, which is a native to South America.  It is technically a fruit ( a berry to be precise) but is generally categorized as a vegetable. Tomato is generally red when ripe, but can come in a variety of colors, including yellow, orange, green, and purple.  There are many subspecies of tomatoes, with different shapes and flavor.

The main contents of tomato are 95% of water, and the remaining 5% consists of carbohydrates and fibers. It is a great source of vitamin C, potassium, folate, and vitamin K.  They are the major dietary source of the antioxidant lycopene, which has been linked to many health benefits, including reducing the risk of heart disease and cancer.  Tomatoes are commonly eaten raw in salads, served as a cooked vegetable, and also used as an ingredient in various dishes, and pickles.

A large percentage of the world’s tomato crop is used for processing products, which include canned tomatoes, tomato juice, ketchup, puree, paste, and sun-dried tomatoes or dehydrated pulp.

A brief history of tomato 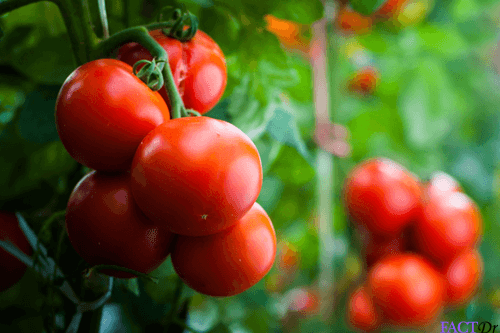 Tomato species originated in the Andes Mountains of South America, mainly in Peru and Ecuador, and is thought to have been domesticated in pre-Columbian Mexico.  Tomato was introduced to Europe by the Spanish in the early 16th century, and the Spanish and Italians seem to have been the first Europeans to adopt it as a food.  In France and northern Europe, the tomato was initially grown as an ornamental plant and was regarded with suspicion as food because botanists recognized it as a relative of the poisonous belladonna and deadly nightshade.

Neurotoxin solanine is present in the roots and leaves of the tomato plant and considered highly poisonous. The Italians called tomato as Pomodoro (golden apple) because the first tomatoes known to Europeans were yellow.  The French called it pomme d’amour (love apple) because it was thought to contain aphrodisiac properties (a substance that increases libido when consumed).  Tomatoes were introduced to North America by Europeans.  Tomato did not attain widespread popularity until the early 20th century.

Heirloom tomatoes:  Heirloom tomatoes are generally considered to be a tomato variety that has been passed down through several generations of family.  The seeds are what make an heirloom tomato special. They are passed down from season to season and taken by the farmers from the tomato plants that produce the best fruit.  This process allows farmers to select for specific and desirable traits like juiciness, size, shape, or color. These tomatoes are generally expensive.

Heirloom tomatoes have a superior flavor as compared to other tomatoes.  These tomatoes have a wide range of sizes and vibrant colors, which makes them the best tomatoes to enrich any dish. These tomatoes are a perfect addition to sandwiches, salads, grilled or roasted, and even tastes great when consumed raw.

The sweet and juicy freshness of a ripe red vine tomato makes them a mainstay in any kitchen.  Tomatoes on the vine are best for any type of dish including salsa, sauce, canning, juicing, dicing, salad, and soup. These tomatoes can do just about anything and the possibilities with a tomato on the vine are endless.

What do tomatoes contain?

The main contents of tomato are 95% of water, and the remaining 5% consists of carbohydrates and fibers.  It is a great source of vitamin C, potassium, folate, and vitamin K. Lycopene antioxidant present in tomato has been linked to many health benefits, including reducing the risk of heart disease and cancer.

Carbs:  Carbohydrates make up 4% of raw tomatoes whereas simple sugars, such as glucose and fructose accounts to almost 70% of the carbohydrate content.

Fiber:  Tomatoes are a good source of fiber.  Around 87% of fibers present in tomatoes are insoluble, in the form of hemicellulose, cellulose, and lignin.

Vitamins & Minerals:  Tomatoes are a good source of several vitamins and minerals namely:

Why should you eat tomatoes daily?

There are numerous health benefits related to consuming tomatoes and tomato-based products, which are linked to heart disease, cancer prevention, and skin health. 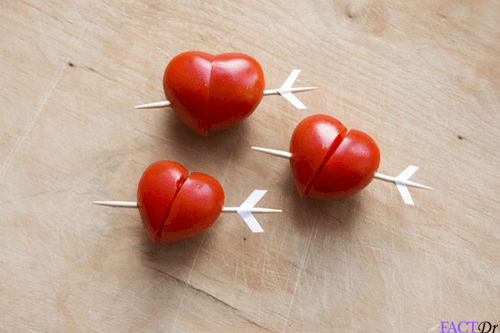 Having a healthy heart is directly related to a healthy life.  Many people are affected by cardiovascular disease namely coronary artery disease, high blood pressure, cardiac arrest or heart attack, congestive heart failure, arrhythmia, peripheral artery disease, and stroke, which is the most common cause of death.  Clinical trials have shown that lycopene supplementation, which is present in tomatoes is effective at lowering LDL cholesterol. Lycopene has the ability to reduce inflammation and markers of oxidative stress, which in turn protects the inner walls of blood vessels and decrease the risk of blood clotting.

It is a generic term for the uncontrolled growth of abnormal cells.  Lycopene, which is an antioxidant, helps fight free radicals in the body.  Lycopene, which is a carotenoid, has the ability to protect against the development of breast cancer.  Tomatoes also contain vitamins such as vitamin A, C, and E, which are the enemies of cancer and prevent cancer growth.  There is also research done, which has found that people consuming tomato and tomato products are less prone to incidences of prostate, lung, and stomach cancer.

It is a medical condition where the body is unable to process blood glucose appropriately.  Tomatoes, which are low in carbohydrates, are the ideal food to control type 2 diabetes by lowering the blood sugar levels.

Tomatoes are also considered beneficial for skin health.  Tomatoes contain lycopene, which is an antioxidant that helps fight free radicals in the body. Tomatoes help reduce open pores and blackheads. Just applying raw tomato to the face and allowing the juice to saturate into the pores and wash it thereafter can help in reducing pores and removing blackheads from the face.  Consuming tomato along with olive oil can provide tremendous effects by reducing sunburn up to 40%. 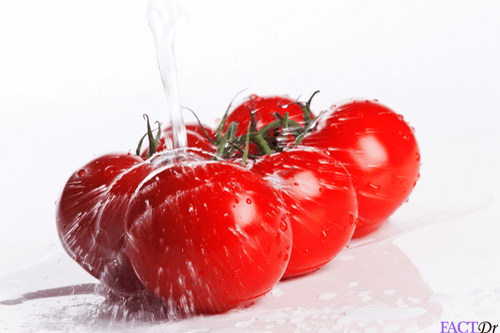 High consumption of tomatoes should be avoided by people who are on a prescription medication called beta-blockers, which is prescribed for people suffering from heart disease.  Due to the presence of potassium in tomatoes, it can cause an increase of potassium levels in the blood and can lead to impaired kidney function.

Tomatoes are also not advised to people suffering from gastroesophageal reflux disease (GERD) because of the presence of some acid content in tomatoes and can cause increased heartburn and reflux.

Tomatoes are juicy and sweet fruit filled with antioxidants, which may help fight several diseases.  Tomatoes are high in lycopene, which is a plant compound and acts as an antioxidant. Tomatoes can improve heart health, cancer prevention, and protect against sunburns.  Tomatoes are generally a valuable part of a healthy diet, which can be consumed on a daily basis for a healthy lifestyle.