How to beat the common cold, flu, and sinus infection instantly? 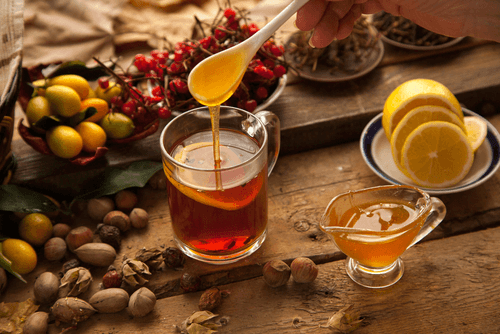 The season of sneezing and wheezing is upon us!

A runny nose, a sore throat, and pounding headache – these common symptoms plague the entire population causing much discomfort and disturbance. Some dismiss it off as a common cold while others think it’s a bout of flu (influenza).

And some have to bear even more disturbing consequences such as sinus infections. The common cold, influenza, and sinus infections have loads of symptoms common to each other and thus people often confuse one with the other. This wrong diagnosis often leads to people taking up the wrong treatment course which results in even higher virulence and spread of the infection and delayed cure.

Again,incorrect medication may also lead to the phenomenon medically known as Antibiotic Resistance. This usually occurs when you take antibiotics medications to treat viral infections. It must be noted that this practice is grossly wrong since antibiotics are only effective against bacterial infections and not viral outbreaks.

This makes the pathogen resistant to the drug, or in simple words stronger against the action of the medicine. As the resistant power of the microbes grows, their potential for spreading infections grows manifold. In the end, all you are left with is an untreated infection and a body plagued with stronger and more immune pathogens. So unless you are planning on spending the winter months tucked in your bed with a stuffy nose and unending bouts of fever, try to understand the difference between these extremely viral infections. Also, find out how you can easily build up your natural immunity and defend your body from such harmful microbial invasions. 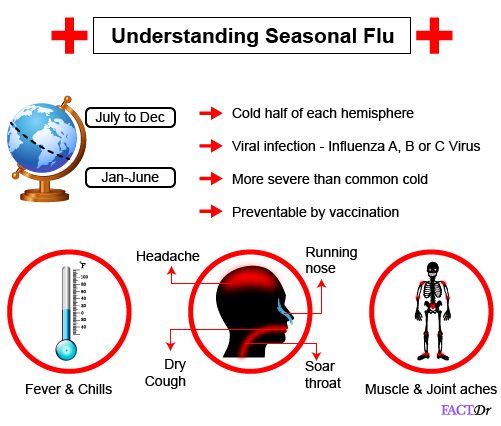 The season of flu occurs during the cold half of the year for each hemisphere. This means June to December for the regions of the northern hemisphere and January to June for the countries in the southern hemisphere. Influenza is basically a respiratory infection caused by the Influenza A, B, or C virus. This extremely contagious disease usually spreads through infected droplets suspended in the air which contain the said pathogens.

There is no one particular reason that relates this disease becoming an epidemic to the onset of winter months. As a ,matter of fact,scientists have claimed several reasons why influenza becomes highly pandemic in the cold half of the year. Some of these are-

Where it gets serious…

The biggest mistake people commit is that they shrug off a case of influenza as an incidence of common cold.Influenza is a more serious condition and has resulted in several million fatalities in the past few decades. During the time period 1918-1919, a deathly epidemic of this infection worldwide, “The Spanish Flu” claimed lives of more than 40 million individuals.

In the present day, it results in 250,000 to 500,000 fatalities per year worldwide. The flu virus targets the upper respiratory tract – the nose, the throat, and the bronchi (passage leading inhaled air to the lungs). The most common symptoms include a headache followed by high fever, weakness and nausea, sore throat, and sputum-less cough (a dry cough) and even rhinitis.

Protect yourself from the seasonal flu

Aptly named, the “common” cold is another self-limiting upper-respiratory tract infection which is most evidently characterized by a runny nose. By upper respiratory tract, it implies that the spread of the virus is along the nose, throat, sinus, trachea, larynx, and the bronchi.

While there are 200 different types of virus that can cause the common cold, the rhinovirus is the most common agent, responsible for around 30%-50% of the infections. On an average, an adult experiences 2-3 bouts of cold every year while this number may be slightly higher in case of children (5-8 times annually). 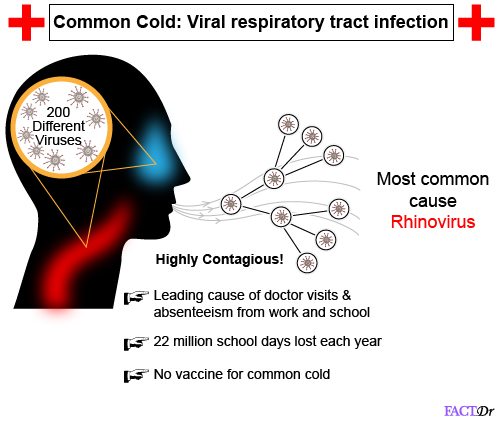 How does one actually distinguish between a case of common cold and influenza? There are certain key differences between these two commonly confused viral infections, which can be summarised as-

Now that you know the key differences between these ailments, let us understand how you can build a strong defense against the common cold-causing pathogens.

Protect yourself from the common cold 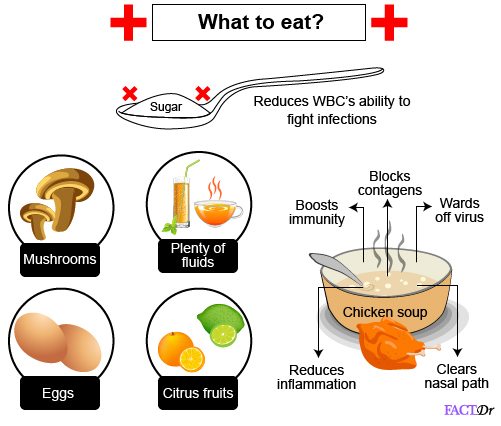 Going by medical nomenclature, sinusitis literally means inflammation of the sinuses. Sinuses are air-filled sacs spread around the nasal region. These have a variety of functions ranging from humidifying inhaled air to protection against facial trauma. When these become filled with fluid, they become a breeding ground for pathogens.

A rapid spread of germs in the sinus causes swelling, redness, and inflammation or sinusitis. The main reasons why your sinuses might get blocked or inflamed are cold (running nose), allergic reactions such as rhinitis, nasal polyps, or even a deviated nasal septum.

The initial symptoms of an acute case of sinusitis and cold are almost the same such as pain in the facial region and a continuously running nose. People who have chronic sinusitis tendency experience these symptoms for the longer duration of time (anywhere between 4-12 weeks). Since the nasal area gets constricted due to swelling of the sinuses, people generally report having lost the sense of smell.

The nasal discharge in case of sinusitis is not clear and the patient might also suffer from tooth pain and halitosis (bad breath). So how do you ensure protection against this highly contagious infection?

Protect yourself from sinusitis 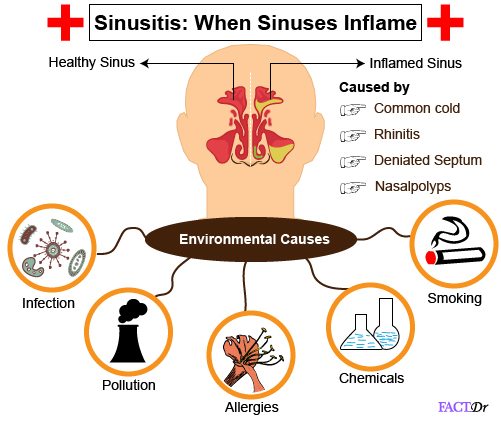