Quinoa : A prodigious superfood you need to include in your diet today! 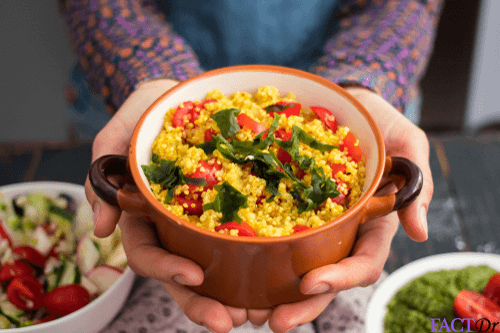 Home » Nutrition » Quinoa : A prodigious superfood you need to include in your diet today!

The “mother” of all grains

Appearing as a sudden burst of hues of violet, crimson, and yellow along the backdrop of the gigantic grey mountain ranges of the Andes, quinoa harvests mean much more than a staple diet to the local populace.

First domesticated by the Andes locals, almost 7000 years ago, the quinoa is not only indigenous to the Andean population but also hailed as a sacred bounty of the earth. Legend has it that every harvest season the Incan emperor himself would sow the first seeds of this wonder crop using supposedly gilded tools. 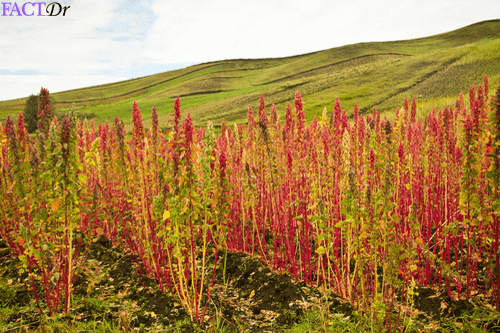 In recent years, this native South American grain has been trending all over health websites and found its way into every popular cuisine, including sushi (yes, you heard it right!)

So how come this humble crop, a staple of the hardworking Peruvian and Bolivian peasants ended up becoming a popular diet trend all over the world?

The answer is as simple as it can be. This grain is a powerhouse of nutrients.

Yes, but with quinoa a whole another level of healthy goodness presents itself, filling in the massive nutritional gaps created by our “modern-diet”.

Let us take a look into what quinoa has in store for us.

Before jumping into the many health benefits of quinoa, let us first understand what quinoa really is.

Quinoa is an edible seed of an herbaceous flowering plant of the amaranth family. And much like its distant botanical cousins, the amaranth and the spinach, quinoa is replete with nutrients necessary to sustain a healthy body.

Quinoa is not a cereal. It is an Andean plant, the seeds of which have use analogous to cereals.

There are three main varieties of Quinoa: Black, red and white.

The major reasons for quinoa being counted as one of the top health foods in the world are that it is gluten-free and the only health food that contains all the 9 essential amino acids.

The nutrient-enriched Quinoa plant has a lot to offer when it comes to health. Mentioned below are some amazing health benefits that the plant renders

According to the United States Department of Agriculture (USDA), the nutrient database for standard reference, release 21, the nutrients in 1 cup (185gms) of cooked quinoa are as follows:

It also has traces of Omega 3 fatty acids. 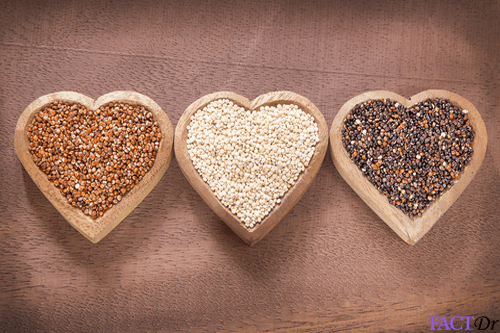 Amino acids are the building blocks of proteins.

Quinoa contains all the 9 essential amino acids and is thereby considered as a complete protein.

The amino acid lysine is usually not present in all grains.

It participates in the process of tissue repair and growth. Quinoa is superior to most of the grains in terms of quantity and quality of the protein. It is an exceptional source of plant-based proteins for vegetarians and vegans.

Based on how they affect blood sugar levels, carbohydrates present in food have been relatively ranked. This is known as the glycemic index.

Foods with low glycemic index (less than 55) are metabolized, digested, and absorbed slowly. Therefore, they cause a slow rise in the blood sugar levels and eventually the insulin levels increase slowly. Quinoa has a low GI of 53.

Foods with high GI stimulate hunger and eventually lead to obesity. They are linked to diseases like type 2 diabetes and cardiac diseases.

Gluten intolerant individuals have to settle for food made of refined starches.

Gluten-free food items made from Quinoa can add to the nutrient and antioxidant value of the diet.

It also helps to maintain and regulate the metabolic pathways and processes of the body.

Quinoa is rich in fiber content. Unfortunately, it has a high level of insoluble fiber as well.

1 cup (100 gm) of quinoa contains approximately 2.5gm of soluble fiber. The amount of fiber reduces when the quinoa is boiled. Total fiber content comes up to 17-27 grams per 100 gm of quinoa.

Additionally, magnesium helps in the production of energy, maintenance of healthy bones and teeth and detoxification of the body.

Manganese being a potent antioxidant protects the mitochondria (powerhouse of the cell) from oxidative damage during the catabolic process or during the energy production.

Additionally, it protects the red blood cells from the damage caused by free radicals circulating in the blood. 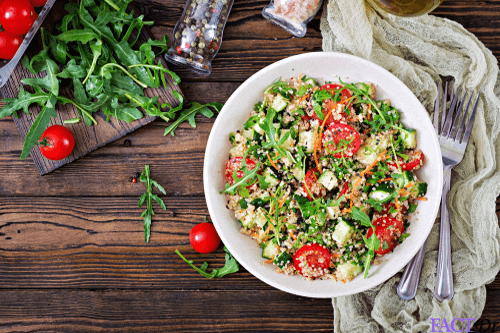 These antioxidants are believed to exhibit anti-cancer, anti-aging, anti-depressant, and anti-viral properties.

As quinoa is a rich source of vitamin B2, it augments metabolism and energy liberation in the muscle and the brain cells.

Presence of iron helps in the formation of hemoglobin.

Optimum iron levels aid in the functioning of the brain, synthesis of neurotransmitters and regulation of enzyme activity.

In addition to being a source of a superfood, the Quinoa plant can be used to reap several other benefits as well.

The plant is supposed to exhibit medicinal properties.

The natives of the Andean civilization have been using the stem, leaves, and grains of the plant for various medicinal purposes such as- to reduce inflammation, pain, and swelling, for wound healing, for reduction of pain (chiefly toothache), disinfection of the urinary tract, to arrest internal bleeding etc.

The compound- “Saponin”, extracted from the bitter variants of the quinoa plant can alter the permeability of the intestines. This property of the plant can help in better absorption of certain medications.

A concentrate made from the protein content extracted from the quinoa plant is the prospective nutritional supplement and a rich source of protein of plant origin.

It can serve as a potent substitute for the chemically modified starch owing to its remarkable stability in freeze-thaw conditions and smaller dimension of the starch grain.

Some of the places where it can be used are- self-copy paper, excipients in the plastic industry, pulps, dessert foods, talcum powder, aerosol production, etc.

The stem and the leaves of the plant can be used as a natural insect repellent.

The saponins extracted from the pericarp of the bitter variants of the Quinoa plant can be used as bio-pesticides.

The property of foaming in aqueous solutions makes it useful for the manufacture of soaps, detergents, shampoos, toothpaste etc.

Other distinctive features of quinoa

Quinoa has been considered by NASA (National Aeronautics and Space Administration) as a crop of the future which is ideal for cultivation on spacecraft for long-term space missions. It has the following distinctive properties which make it stand out from the rest:

The plant has a unique quality of adapting to various climatic conditions. It can sustain temperature ranges from -4 degrees to 35 degrees Celsius. It can thrive from sea level to a height 4000 meters above sea level.

Certain variants of quinoa can tolerate drought-like conditions and are resistant to salinity. Additionally, quinoa can be grown in highlands as well as lowlands making it the first crop choice for lands with unfavorable conditions.

Since the plant is quite adaptable to extreme climates and adverse conditions, the production cost is low and does not hurt the pocket of the farmer.

15 minutes to fitness – How to eat the crunchy quinoa

Quinoa has a delicate earthy or nutty taste. It has two variants bitter and sweet. The bitterness can be attributed to the compound- saponin which is present in it.

It has a unique chewy texture which imparts crunchiness to all its preparations.

Yet another advantage of having quinoa in your kitchen pantry is that unlike its other healthy counterparts such as brown rice that takes more than 25 minutes to cook, quinoa is ready within 10-15 minutes.

While for most people quinoa cooked in plain water could be more on the blander side, cooking quinoa in vegetable or chicken broth adds a unique flavor to it.

Most quinoa lovers add a pinch of spice such as crushed pepper or thyme along with salt and a dash of lime to make it more palatable.

Many prefer sweetening it up just like oatmeal. You can add milk and a top it with a serving of your favorite foods and voila, you have made yourself a super quick healthy breakfast!

For the gourmet food lovers, feel free to add cheese, breadcrumbs, and vegetables to it. Similarly, quinoa has also found its way into the recipe of a hearty bowl of vegetarian chili. Be it muffins, porridges, soups, vegan burgers, or even granolas – quinoa has indeed secured its place as a hugely palatable and nutritiously rewarding wholesome grain.

As a mark of recognition, the United Nations had announced the year 2013 as the “International Year of Quinoa (IYQ)”. This recognition was dedicated to the native people of the Andes region who have preserved the legacy of quinoa as food for the generations to come. Also, they have also been lauded for implemented ethical farming practices making quinoa farming organic, gluten-free, fair trade, and whole grain.

Quinoa – The Dark Side

Though there is no denying that quinoa wholly justifies its title of being the “chisoya mama” or “the mother of all grains”, there are certain facts that should be considered before inculcating quinoa in your diet

The compound called saponin extracted from the pericarp of the bitter variants of the quinoa plant can lead to stomach upset, severe indigestion or stomach ache. Hence, it is advised to wash the seeds thoroughly in running water before cooking them.

Individuals taking antioxidant supplements should also be cautious while inculcating quinoa in the routine diet as it is a rich source of antioxidants.

Quinoa – From the ancient to the modern world

The Spanish conquests of South America in the 16th century resulted in an unfair suppression of quinoa cultivation.

The colonials dubbed this crop as a “food for Indians”, thereby almost wiping out its existence from the chapters of history.

However, nothing could stop this crop from growing (sparingly so) and much later, during the 1980s quinoa witnessed it much deserved revival.

It wasn’t long before farmers, nutritionists, scientists, and marketers realized its true potential as a crop of healthy abundance and thus quinoa regained its former glory. Today, you cannot flip a health magazine without seeing a mention of this highly nutritious superfood.

So the only question is – when do you kick-start your own quinoa meal routine?