Aspartame – Hidden truths about this storm in a teacup 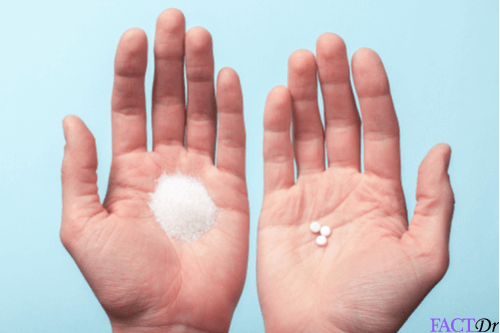 Home » Nutrition » Aspartame – Hidden truths about this storm in a teacup

Aspartame, the dieters’ favorite, has always sparked controversy about its so-called negative side effects. This sugar substitute, the ‘not-so-sweet’ additive for many, has gone under the scanner on several occasions for allegedly doing more harm than good. So, is it just a storm in a teacup and does aspartame, truly live up to its sweetness?

Aspartame is a well-known artificial sweetener available under the brand names of Equal, NutraSweet and Candarel. This food additive doubles up as a sucrose substitute in roughly about 6000 consumer food and drink products globally.

The Birth of Aspartame

Scientist James M. Schlatter, a chemist employed with G.D. Searle & Company can well be called the ‘Father of Aspartame’. On his quest to research an anti-ulcer drug, he had inadvertently licked his finger and found it tasted really sweet. This interesting and chance discovery of Aspartame in 1965 led to the birth of this household essential.

Thus, began the journey for this artificial sweetener which has since enjoyed unparalleled growth for a long period. Recently, its popularity seems to have witnessed a steady dip owing to some of the alleged side effects. Although the health watch-dogs have given a clean chit, this food additive remains in the grey area with skeptics growing in numbers.

Get to Know Your Aspartame

What is the composition of aspartame? It is made up of two naturally occurring amino acids, phenylalanine, and aspartic acid. It is interesting to note the process of assimilation of aspartame into the body. When this artificial sweetener enters the body, it gets broken down into amino acids. A slight amount of methanol is also released in the process.

Foods and Medicines with Aspartame

It is found in many of the products used regularly by consumers. Many packaged products contain aspartame.

For instance, this sugar substitute is found in:

Why is Aspartame Popular? 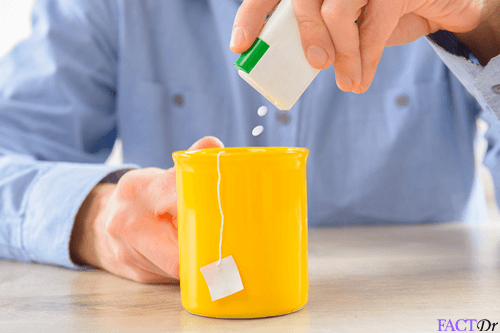 It shot to instant fame as it is many times sweeter than natural sugar. The American Cancer Society has pegged the numbers accurately, pointing out that aspartame is nearly 200 times sweeter than sugar. This means, using just a wee bit of this sweetener is adequate to provide the required sweetness, as opposed to the amount of sugar.

Although the calorie content is at par with sugar, about four calories per gram, aspartame is preferred as its use results in fewer calories. Its perceived benefits on weight management, with intake of reduced calories, cannot be overlooked. 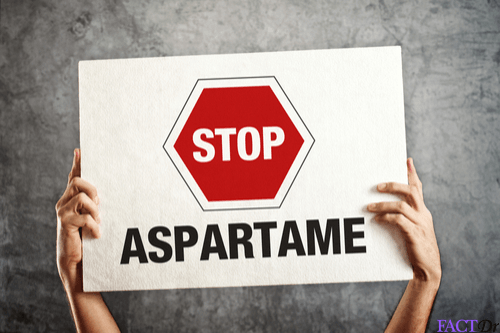 Despite its wide use, aspartame’s growth trajectory was never smooth. This sugar alternative has grappled with a fair share of flak and controversy surrounding the safety of its use.

A review of many hundreds of studies on ‘Safety of Aspartame’ was conducted by the European Food Safety Authority (EFSA) about five years ago. The review concluded that it is safe for human consumption as long as the acceptable daily intake or ADI was followed.

The ADI of aspartame was set at 40 milligrams (mg) per kilogram (kg) of body weight. The FDA had set an ADI for aspartame at 50 mg. Both limits set by EFSA and FDA far exceeds what most people will likely consume in a day.

Figuratively, does this artificial sweetener leave a bad taste in the mouth? Is it detrimental to health, especially with prolonged use?

The neurotoxic influence of aspartame cannot be overlooked, an overriding sentiment among many medical experts in the field. 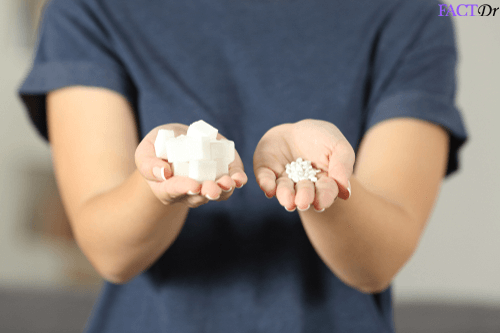 How Aspartame is Counter-Productive

Its influence on weight management

Its perceived benefit on weight management as a low-calorie sweetener may not be true, according to 2017 research study.

The study found, there was no concrete proof of the role of these low-calorie artificial sweeteners in weight management.

On the contrary, detailed research that tracked study subjects for several years found the effects of Aspartame to be counterproductive to weight management. The participants of the study on regular artificial sweeteners showed increased waist circumference and body weight. The BMI had shown a steady increase which is connected to elevated risks of metabolic disease.

The study also found that regular intake of these artificial sweeteners upped the risk of diabetes, stroke and heart disease.

Researchers explained that artificial sweeteners impede the signaling method during the consumption of foods with more calories. To explain this phenomenon in detail, when foods with a sweet taste are consumed, signals are sent about food entering the gut. The body prepares to receive calories. Signals are also sent about feelings of fullness and satiation so that food consumption is stopped.

Artificial sweeteners also have a similar effect. The only difference is that the body feels tricked when it receives fewer calories than what is expected to receive. Consistent occurrence of this process was thought to hamper the body’s ability to discern the connection between calories and sweet taste. After a while, the body refuses to feel satiated with low calorific food, resulting in overconsumption of food.

Effects on metabolism and risk of glucose intolerance

Aspartame influences the control of appetite. This could lead to other repercussions like the onset of metabolic diseases, Type 2 Diabetes for one.

A 2013 study explained how artificial sweeteners can weaken the gut’s ability to manage dietary sugars. Further, a recent study conducted two years ago has pointed to the risk of metabolic disease with these low-calorie sweeteners. The study also suggests that the prolonged use of sweeteners could result in altering the balance and variety of gut bacteria. This could very soon lead to glucose intolerance, an incidence found in animal studies thus increasing the risk of Type 2 Diabetes.

Obesity seemed to up the risk of glucose intolerance with long term aspartame use, a 2016 study found. The risk was much less among healthy weight individuals on sweeteners.

These studies point to the involvement of aspartame in exacerbating the risk of glucose intolerance among overweight individuals. Although the evidence available is inadequate for a conclusive link, this area needs to be probed further to confirm the role of aspartame in increased health risks with prolonged use.

Risk of Seizures and Brain Cancers

Earlier studies on mammals pointed to the development of brain cancers and grand mal seizures in mammals. Human studies carried out by the US Food and Drug Administration and the European Food Safety Authority found the so-called negative effects of prolonged use of artificial sweeteners was not constant in humans.

This is a brief insight about the effects of prolonged intake of the artificial sweetener, although a detailed study on humans is needed to establish this link. Even though it is declared safe for consumption, yet skeptics are not fully convinced about its benefits.

Media has also played a significant role in swaying public opinion about this product. What may have been an innocuous-looking email in 1998, lent a huge blow to the makers and marketers of this sweetener, casting a shadow on the use of this product.

The email which went viral cautioned people about the grave health risks of aspartame use. Seriously worded, the email sparked a huge controversy along with a new medical term that came into force – Aspartame disease.

The United States’ Department of Health was quick to arrest the negative publicity. They conducted a detailed study which concluded on a highly positive note. No epidemiological connection to the risk of diseases was found with aspartame use.

Caution with Aspartame – The Restraints

Those who suffer from the below mentioned medical conditions should ideally avoid aspartame:

A genetic medical disorder characterized by increased levels of the essential amino acid, phenylalanine in the blood. Phenylketonuria or PKU weakens victims’ ability to metabolize phenylalanine. This means PKU sufferers must avoid or restrict the intake of aspartame as phenylalanine toxicity is a reality. Phenylalanine is part of the composition of aspartame and is also found in meat, eggs and fish and dairy products. Victims of PKU must keep tabs on all the sources of phenylalanine in order to avoid toxicity.

Tardive dyskinesia or TD is characterized by an uncontrollable and sudden jerking of the face and body. A body of research delving into the causes of TD found that phenylalanine could trigger the muscle movements that typify TD. TD is listed in medical conditions under neurological disorders and these researchers think that it is a side effect of long-term use of certain psychiatric medications.

Aspartame has faced both bouquets and brickbats. It has been a roller coaster ride for this artificial sweetener in the throes of health scares, a barrage of political and medical debates and controversies. A lot has been spoken and written about aspartame and the health risks it poses.

A serious allegation of vested interests has dogged those responsible for safety tests and research studies of this sweetener. This led consumers to doubt the veracity of approvals by reputed organizations.

The U.S. Government Accountability Office conducted an absolute review of the methodologies involved in the testing and distribution of aspartame in 1986 and the approval process in 1987. The government body found all allegations to be baseless.

It is a shot in the arm for aspartame, that also received the health watch dog’s approval for use in more than 100 countries.

Further, in 2002, the European Scientific Committee on Food reviewed nearly 500 safety studies on aspartame. The review concluded that it was absolutely safe to use aspartame as per the acceptable daily intake (ADI) of 40 mg/kg of body weight, with the disclaimer that victims of the genetic condition phenylketonuria (PKU), should avoid this artificial sweetener.