Rising mercury and your health: How Global Warming is damaging your body 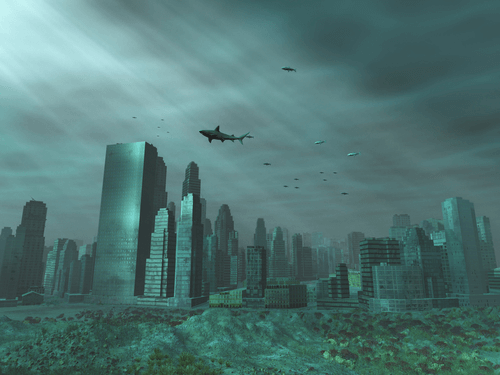 Home » Healthy living » Rising mercury and your health: How Global Warming is damaging your body

How has the earth changed in the past 100 years? 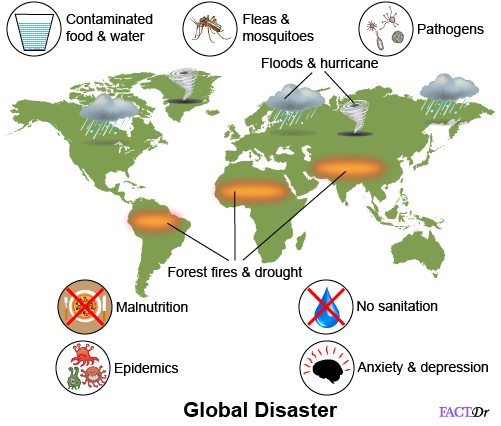 Since the last Ice Age, the rate of increase of global temperature has been 1 deg celsius rise every 951.5 years.

Global warming, a result of rampant industrialization and urbanization, caused a similar rise in temperature in mere 130 years.And the rate at which we are burning fossil fuels and clearing forest lands, this trend is only going to worsen. Such a rise in temperature is bringing apocalyptic changes to the planet.

And one of the worst victims is the human body.

Technical and industrial progress, which were supposed to make our lives simpler and better, have spawned a toxic environment for every living creature on this planet. Let us see what the World Health Organization has to say about this

How can rising temperature lead to health hazards? 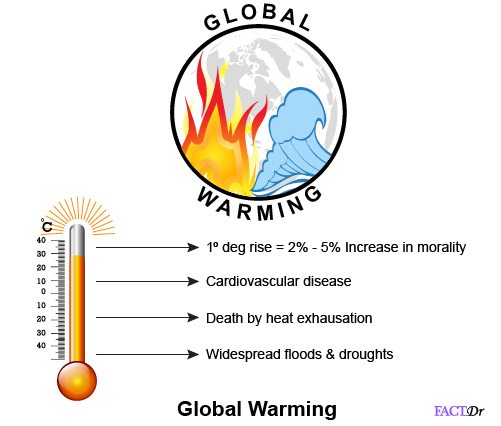 Our body has evolved to function optimally at a particular temperature. This ideal body temperature is 37 degree Celsius. Every organ and organ system, beginning from our brain to the circulatory system, to the immune system – every element of the human body is accustomed to working effectively within this body temperature. This balance between external and internal temperature, thermoregulation or thermal equilibrium is maintained by the hypothalamus (a region of the brain).

Our skin is the main organ that balances the signals from the external environment. Thermal regulation is one of the critical factors influencing homeostasis. The coordinated working of every vital organ depends on this homeostatic state.What happens when the external temperature rises beyond a “tolerable” or “safe” limit?

It becomes difficult for the body to maintain the required homeostatic temperature. This triggers a chain of reaction that attacks every bodily function imaginable.

Boiling heat and your vital organs 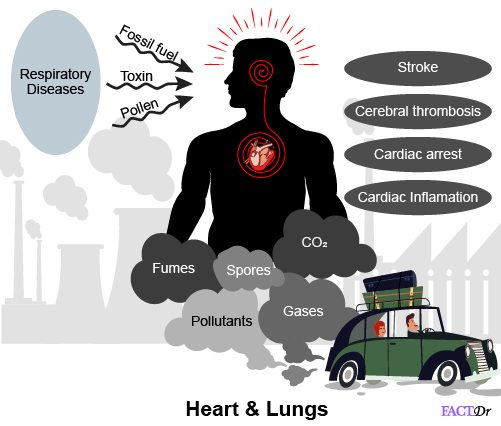 Extreme temperature changes increase disturbances in heartbeats (dysrhythmia). This has been indicated by several studies have revealed that as the average temperature rises, the number cardiac arrests rise too. In many cities such as London, the daily mortality because of cerebral thrombosis doubled owing to heat waves.

Additionally, higher global temperature is directly related to increased ozone concentration. This puts an additional strain on your lungs and heart. Since the amount of oxygen is depleting, respiration becomes difficult too. Additionally, due to massive burning of fossil fuels, a huge amount of toxic particulate matter is entering our systems. These foreign bodies elevate cardiac inflammation.

This results in systematic cardiac inflammation, thrombosis, pulmonary embolism, and overall deterioration of cardiac function.These collectively increase your risk of myocardial infarctions or heart attacks. Similarly, the same particulate matter is the responsible for recurring chest pains, coughing and wheezing, and pulmonary inflammation.

Another shocking after-effect of global warming is the increase in environmental allergens. Studies indicate that high CO2 concentration amplifies the number of pollens and spores in the atmosphere. The concentration of mold spores rises dramatically as a result of increased humidity.It is not surprising that, globally 235 million people are currently suffering from asthma.

Global Warming and environmental toxins increase your risk for COPD (one of the leading causes of deaths worldwide). 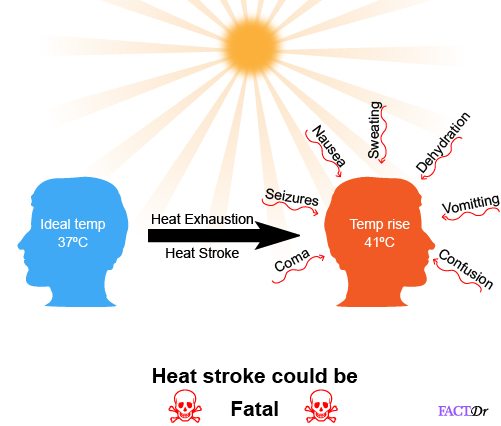 Heat exhaustion and heat stroke lie at the extreme ends of the spectrum of heat-related conditions.

If heat exhaustion is not controlled, it can lead to heat stroke.Under conditions of extreme heat, your body becomes dehydrated and is hence not able to keep itself cool by sweating.If the heat is making you feel excessively nauseous and light-headed, and you feel the urge to vomit, high chances are that you are experiencing an episode of heat exhaustion.

Additionally, you might also feel your muscles cramping up.When this condition advances, it takes the form of heat stroke. It begins as a low-grade fever which rapidly advances to a temperature as high as 106 F (41 deg Celsius). This is a fatal condition where the body’s cooling system completely fails. It could lead to severe mental deterioration such as seizures, confusion, and even coma.If immediate help is not provided, sudden death occurs in almost half of the patients.

Global Warming and the rise of droughts

Almost 40% of the entire global population is dependent solely on agriculture as its livelihood. And 100% of the population relies on it for nutrition. When the global temperatures soar, they tend to cause recurring droughts. This poses a serious health risk to people, both directly and indirectly. Heat causes an increase in forest fires which adds particulate matter to air.

People in drought-stricken areas often catch the fungal infection, coccidioidomycosis, or valley fever. There is a widespread compromise in hygiene and sanitation, as there is lack of water. Such food shortage leads to chronic and widespread malnutrition. Contamination of crops due to use of recycled water could also trigger widespread epidemics. The pathogens most commonly causing such kind of infections are E.coli and salmonella.

But the most drastic aftermath of a drought is on the mental health of the victims. Studies have indicated that widespread agricultural destruction and ever-increasing economic burden associated with drought takes a toll on the lives of the people. Farmers, especially, are caught in the vicious cycle of debts and loans which leads to the onset of anxiety and depression.

Since people are devoid of a normal and healthy living with proper nutrition and support, one can observe exacerbating effects of stress and depression among the entire population. Subsequently, the onset of suicidal tendency is also observed in drought-hit areas.

The thin layer of air engulfing our entire planet, the atmosphere, is being fed daily with an unhealthy dose of greenhouse gases. Rampant exploitation of natural resources and uncontrolled burning of fossil fuels are generating as much heat as exploding 40,000 atomic bombs every day!

This excessive production of CO2 gases has entered the domain of plant kingdom, disrupting the quality of crop production; a phenomenon termed by experts as the “Junk Food Effect”. When atmospheric CO2 level rises, it causes changes in the natural nutrient composition of plants. Specifically, the sugar to nutrient ratio is disturbed. CO2 boosts the glucose content of stems, leaves, tubers, fruits, and vegetables.

While simultaneously, it diminishes the essential nutrient content. This could include a decrease in vital nutrients such as iron, zinc, proteins, riboflavin, calcium, potassium and many more. The end result of this is that the natural and organic crops we end up consuming are severely deficient in healthy nutrients and steeped in glucose.

The “Junk Food Effect”, thus describes the phenomenon where we end up consuming empty calories in the name of nutrition, just like in the case of processed junk.This implies that, even if a person wants to consume only healthy and naturally grown plant products, he/she ends up consuming more of glucose.

This coupled with the fact that diabetes and obesity are growing an unprecedented rate, global warming could mean more than just melting ice caps.

The rise of mercury and infections worldwide

Climate change is not just about rising temperature. It also encompasses all the untimely natural disasters that ensue because of growing heat. Warm air holds more moisture. It also causes unnatural atmospheric pressure differences. The result?

Excessive rainfall, cloudbursts, cyclones, and hurricanes worldwide. How do these natural disasters affect the human body? Let’s find out…

As the temperature and humidity rise, they create an ambient breeding ground for disease-causing pathogens and their carriers. Mosquitoes, ticks, fleas – these vectors thrive in extended warm and moist summers. And not just in the surrounding places, but the aftermath of global warming- induced pathogen-breeding can be felt in remote areas as well.

Likewise, it is believed that the massive deforestation in New Guinea triggered the Ebola virus attack by allowing the vector (in this case, fruit bats) to come in close contacts with human habitations. This means that more the temperatures soar, the more the vectors breed aggressively. Insects carrying dangerous pathogens that result in the ever-so fatal malaria and Japanese encephalitis are on a rise.

Similarly, harmful algal blooms and toxic growth of microbes are rapidly contaminating the water you drink and the fresh sea-catch you consume.