Your health in the age of Social Media: Why is digital detox a necessity? 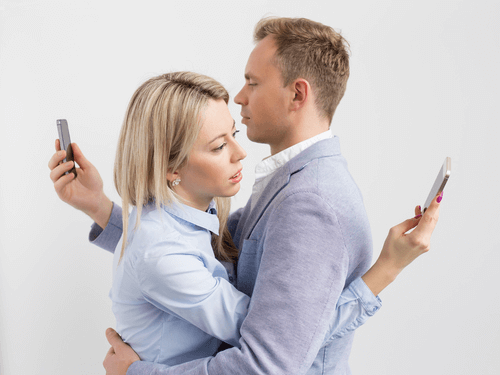 Home » Mental well-being » Your health in the age of Social Media: Why is digital detox a necessity?

That’s roughly just about 6% of the 7 billion human beings inhabiting the planet. This 6% of the entire global population is currently suffering from a terrible affliction.

This extremely viral disease is causing people to develop neural abnormalities (negative changes in the brain’s structure), shorter attention span, and the resulting attention-deficit syndrome. It is also bringing changes at the neurochemical levels, increasing their risk of anxiety, depression, and suicidal patterns.

It has also infused sleep disorders amongst a major proportion victimized by this condition. Studies indicate that this disorder might be causing more number of deaths.

So what is this mysterious disease? Which disease has such bizarre and scary outcomes? It’s not the Ebola or the Zika virus. It is the IAD or Internet Addiction Disorder (also called Problematic Internet Use).

How can a simple platform connecting billions of people together be as hazardous as this?

Read more to find out how the Internet, especially the Social Media is rendering drastic and negative repercussions on our mental and physical health. 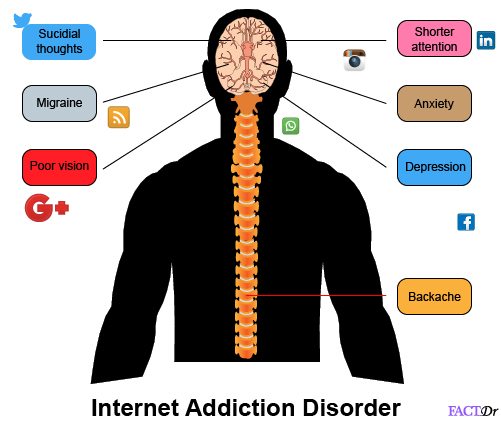 Who wouldn’t want to be in continuous touch with family, friends, old friends from school, and bleak acquaintances?

Well, studies say that if you are “wired-in” for more than 2 hours every day at different social media platforms, there are high chances that you are, paradoxically, more prone to feeling lonely.

Social isolation is defined as the near-complete lack of contact of an individual with the rest of the society and/or the community he/she is living in.

This type of isolation which stems from being too involved in different social media platforms is akin to having no communication with the outside world and a complete avoidance of human contacts.

How is that even possible?

This is how increased involvement in social media platforms begins to hamper your overall health.

And this is just the tip of the iceberg.

Social Media and the classic case of addiction 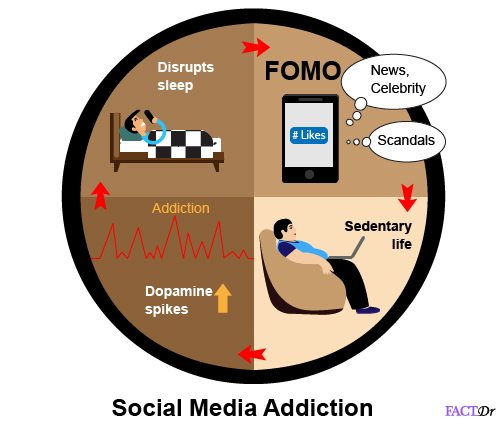 (Yes, a whopping 94% of these caged rodents became addicted to taking sips of sugary-water instead of cocaine).

But sugar-addiction was so last decade. The virtual world of social media has seized the mental well-being of our generation.

And if you find it extremely hard to resist checking up on how well your tweet is performing, you are not alone. The entire concept of social media is built on the idea of making it irresistible and tempting, just like cocaine or cigarette.

The primary factor triggering a lack of self-control over social media is FOMO (Fear Of Missing Out).

How does FOMO affect our mental well-being?

Have you already checked your phone 32 times today? 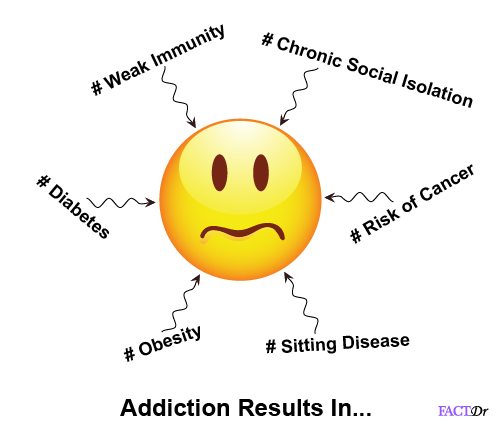 Well, you might think, ok I am not one of “those” who tend to be isolated or cut-out from the rest of the world.

Or even someone who is actually “addicted” to FB or Twitter.

It’s highly likely that you are still not that badly influenced by your peers on social media.

Maybe, you aren’t a compulsive tweeter or a regular instagrammer.

Does this mean that you are safe from the grips of social media obsession?

What else can social media addiction result in?

If these weren’t enough, social media addiction can actually result in numerous direct and indirect health and well-being complications. Few of them are…