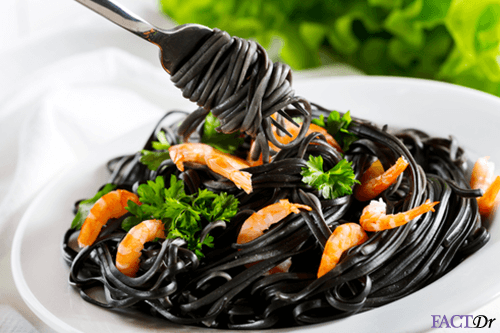 What is squid ink?

Squids belong to the special group of sea creatures called Cephalopods, which come under the group of molluscs. They have some unique features that make them special and one of that is the production of a dark pigment that helps them to escape their enemies. A squid has a special ink sac that contains the pigment which is released in the surrounding water.

While items produced from squid are a delicacy in the international market, the ink sac is disposed of in many cases without any use. However, squid ink has been identified as the most important source of the commercially important pigment melanin.

The colour of this ink can range from dark red, brown and black to deep blue. In recent years, squid ink has made a mark in the kitchens around the world for colouring and flavouring. While the dark or black colour can deliver an attractive tone to the food, it offers quite a few health benefits too.

Squid ink food is rich with antioxidants that have numerous health benefits including keeping the heart healthy and a high rate of red blood cell generation. In addition, it also has a high level of glutamic acid content which makes it a great substitute for salt and fat-rich food items that are not good for health. Apart from that, squid ink also contains chemicals like proteins, minerals, amino acids, lipids and dopamine.

In general, ink sacs are found in octopuses, squids and cuttlefish. It is often believed that squid ink is poisonous in nature even though there is no scientific reason behind that. While squids have venom in their system and a venomous bite, the ink sac is not related to that.

What are the components of squid ink?

The squid ink is a mixture of various chemicals including melanin, proteins, lipids, carbohydrates, glycosaminoglycans and other various minerals. However, the predominant components are melanin and protein-polysaccharides complex. There are also certain enzymes present in the ink. In general, melanin constitutes almost 15% of the total wet weight of the ink when compared with other proteins.

The melanin is the same component that is found in human skin and protects the skin from UV radiation to a large extent. At present, there are no official figures about the required or safe consumption rate of melanin. The ink has also been hypothesized to contain certain chemicals like tyrosinase that can paralyze the olfactory capabilities of the predator.

Melanin occurs in two forms, eumelanin and pheomelanin and in squid ink, the former is found. In general, the ink sac has an ink gland that produces ink. In addition, there is also a funnel organ that produces mucous. Note that even though there have been some researches, the bioactive function of ink is not very clear at this stage.

Some ink has also been analysed as unpalatable for the fish which may help in giving the squid a higher chance of escaping from predators. The ink also contains a type of mucus that interferes with the functioning of the gills in the fish. The general composition of a 1/4th cup of squid ink is mentioned below.

What is the mechanism of squid ink secretion?

The dark colour of the ink sac has made it the subject of much interest and research. The structure of the ink sac can be divided into various parts with the ink gland located at the base. The ink is stored in the sac and it is released through a duct into the hindgut near the anus. The release mechanism is controlled by the muscles in the walls of the sac and a pair of sphincters.

The role of the funnel organ was not realised initially and it was first observed that the ink has a higher level of mucous than that is present in the sac. It was then deduced that the excess mucous must be coming from the funnel, siphon or the mantle cavity. Later, it was found that the funnel organ is the only spot that has the right location and capability to secrete this volume of mucous.

It has been observed that the combination of the ink and the mucous, leads to different shapes in the ink cloud. These shapes can also vary depending on the type of predatory attack that is being faced. In the head or mantle of the squid, there is the mantle cavity that is filled with water.

The water in this cavity is squeezed out, thereby creating some form of jet propulsion that is used by the squid to move through the water. The ink mixes with the water from the mantle cavity when it is pushed out to create a dark ink cloud that distracts the enemy.

The simple form of ink contains a pigment or dye along with a binder. Previously, lampblack or soot was mixed with aqueous binders to produce ink. In subsequent periods, various other forms of pigments were also used in making ink.

In the modern era, ink is used by missing synthetic dyes and compounds. The composition of modern ink can include chemicals like tannic, gallic and dilute hydrochloric acid along with an iron salt, phenol and a blue or black dye.

Other components are added that act as drying agents, an adhesion promoter and a colour developer and also as a preservative. Printing ink is thicker in nature than normal writing ink. It is obvious that chemical ink is not at all suitable for consumption. In case there is accidental consumption or contact with the eyes, medical attention is required immediately.

The uses of squid ink

The ink from squids has been used by humans for decades and some of the most important uses are listed below.

Squid ink has been used as medicine for long periods and is considered an important constituent in many traditional medicines including homoeopathy. In Asian cultures, the ink sacs have been used in alternative medicine systems.

In a recent study in China, squid ink capsules were used to treat women with uterine dysfunctional bleeding and the results were extremely positive. A section of the compound peptidoglycan, extracted from the ink is also being used to enhance antitumor activity in the body.

Some of the components also prevent cellular damage by oxidation and can help in WBC production during chemotherapy. In addition, squid ink also has anti-oxidative properties. It has also shown antimicrobial property against a wide variety of organisms. However, there is much research left to be done in this area to come up with effective medicines in commercial forms that can enhance health.

It has been established that a special angiotensin-converting enzyme separated from squid ink can dilate the blood vessels that can cause a drop in blood pressure levels. Some other forms of squid ink have shown anti-retroviral properties.

In addition, the ink also has the necessary properties to prevent bile diseases from occurring. The ink also inhibits some gastric secretions and has an anti-inflammatory effect. It is to be noted that human studies in these fields are lacking and more research is needed before definite conclusions are formed.

The use of squid ink in food

Squid ink was used in writing, drawing and painting since Greco-Roman periods. At the same time, it is also used in the food industry to add a special flavour to the food.  The main use of the product is in Mediterranean and Japanese cuisines.

Some of the popular dishes that use squid ink are Arroz negro (black rice), txipirones en su tinta (baby squid in ink sauce), ikasumi jiru (ink soup with pork and squid) and Cavianne (an imitation caviar). Some other food items that are prepared with squid ink are Pasta, sauce, risotto, dumplings, salads and flatbreads.

The actual taste of squid ink is somewhat salty or briny. When used in the right quantity, it also adds a very rich and earthy touch to the dish, which reminds of the sea.

In most cases, the ink that is extracted from the sac is used raw in the dish. In some cases, a certain amount of seasoning is added for additional flavours. Squid ink is usually consumed in small amounts and hence it does not lead to significant health benefits.

So even though there are many sources that claim it as the next big health food, there is a lack of evidence in that regard. However, it is true that the chemical has a lot of potential to offer a wide range of health benefits.

Most facts about the role of ink in the defence mechanism of a squid have been gathered from observational studies. Detailed studies are required to underline the molecules and neurological mechanisms regarding the same.

The visual, chemical and mechanical role of ink in deterring the predators is another area that is not yet clear. Apart from the component of melanin, the other chemical compounds in ink have received much less attention. So detailed studies to understand their exact composition and functions are required.

Other than the ink sac, there is also very limited data about the funnel organ and the chemical composition of the mucous that it secretes. The exact role of the mucous when it combines with the ink is also another aspect that is to be studied.

The neural connections between the ink sac and the funnel organ are also not clear and further studies are needed to understand if they are controlled by the same neural centres. This is important to understand the production mechanism behind different forms of the released ink.

Ink has also a range of industrial and medical applications in the food, cosmetics and healthcare segment. There are also opportunities for developing antimicrobials, anti-cancer, anti-oxidants and more type of drug from squid ink.

Various natural products have provided new ways of developing effective drugs and as cephalopod ink has a rich chemical composition, it definitely has the capability to produce newer and more effective drugs. For this reason, it is important to identify the range of chemicals present in squid ink that are responsible for the effects. In addition, the underlying cellular or molecular mechanisms are also need to be outlined through detailed research.

The ink sac is an organ that the cephalopods have possessed for around 300 million years and it is a key element for their survival. The unique properties of squid ink have been utilized by humans for centuries but there have been very limited studies to understand its properties in detail. In reality, the deep-sea habitat of the squids makes them a subject that is difficult to study in detail.

Consuming squid ink is definitely one way of experiencing the flavours of an elegant and aesthetically-pleasing dish. However, the health benefits associated with it may not be as rich as you may think as the amounts are just too small. But if you want to try something different, squid ink in your cuisine is definitely an option.