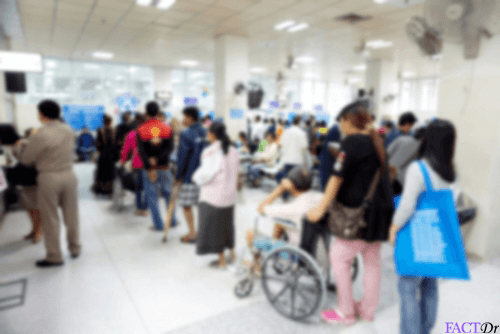 Global burden of diseases – How much do they cost us?

DALYs or Disability Adjusted Life Years is an effective tool in measuring how disabling a disease could be.

Measuring the burden of a disease only on the basis of yearly deaths is not an accurate method since a disease could be less fatal but at the same time could largely restrict normal living.

According to studies conducted extensively worldwide, the following are some of the common widespread diseases which might not be responsible for millions of deaths directly but they weigh down heavy on normal and healthy living.

These diseases are widespread, not because they are virulent and infectious but because they largely stem from faulty living habits.

The global burden of these diseases is high and its high time we understood which diseases could cripple your chances of sustaining a long and healthy life.

Neonatal jaundice, a highly commonplace neonatal condition, occurs as a result of high bilirubin levels in a newborn baby.

Today roughly 60% of live births are diagnosed with this condition. Among pre-term births, this incidence can as high as 80%. 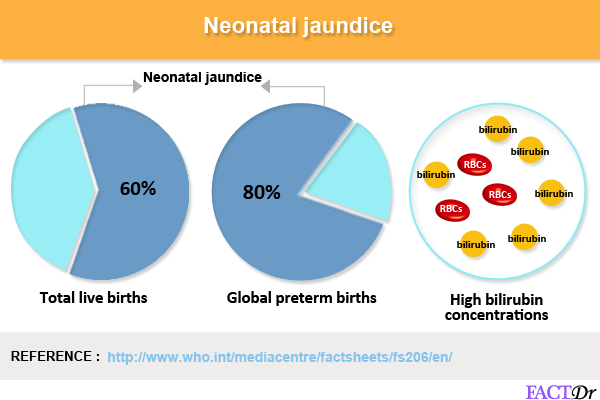 Bilirubin is a by-product of RBC breakdown. Neonatal jaundice is characterized by yellowish discoloration of skin and eyes. This is most commonly prevalent among babies of south-east Asian and Mediterranean descent.

Neonatal jaundice is a benign condition if treated immediately however it can be a precursor to severe neonatal illnesses. In the case of low and middle-income countries, the incidence is high but unfortunately, the diagnostic and treatment tools are not that readily available.

Neonatal mortality constitutes roughly 40% of all mortalities among children under the age of 5.

Before the formal introduction of the chicken pox vaccine in the USA in 1995, this disease had a high incidence rate of almost 90% among children.

Also known as Varicella, chicken pox is a common viral infection marked by high fever and formation of red-itchy pus-filled blisters all over the skin.  It is most frequently observed in tropical regions, during winter and spring seasons. 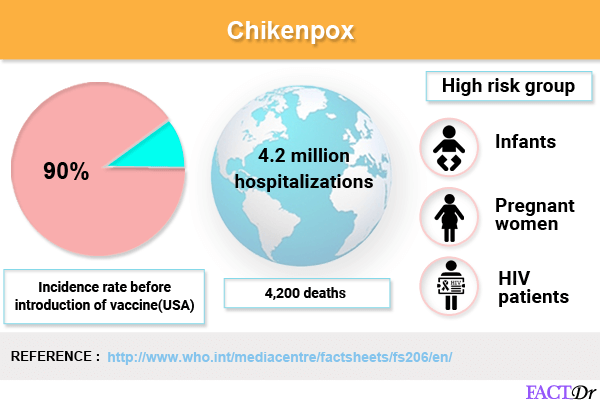 Although this infection is common among children, the symptoms are more severe when it occurs in adults.

Going by conservative estimates, the global burden of chicken pox is 4.2 million severe cases of the diseasewhich necessitated hospitalization and around 4,200 deaths.

Even though there is a vaccine to prevent the onset of chicken pox, the global burden of the disease is still high. Groups which are at higher risk of varicella infection are infants, pregnant women, and immunocompromised people such as HIV patients.

Asthma, a largely disabling condition marked by acute shortness of breath, is the most commonly prevalent chronic illness among children.

It is a major NCD, non-communicable disease that has more than 235 patients worldwide.

Over 80% of the deaths due to asthma occur in low and middle-income countries. The severe restriction of air pathways in the lungs that leads to asthma is mostly a result of environmental pollution and seasonal allergens. 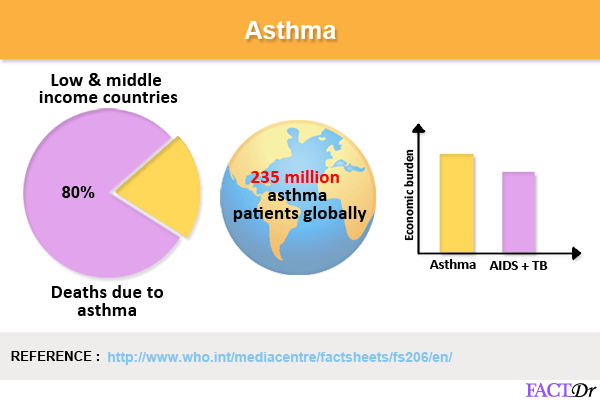 Thus, both surging pollution levels and climate change can be held responsible for such as widespread incidence of this condition.

Proper medication and preventive measures can control the symptoms however if left untreated or under-treated it can largely restrict an individual’s activities. Even though the mortality rate of asthma is lesser than other chronic illnesses WHO estimates that the economic burden of asthma may soon exceed HIV/AIDS and TB combined.

There are more than 360 million people across the globe that have a hearing impairment. According to experts, the leading cause of hearing loss is nothing but ear infections.

WHO estimates that about 60% of childhood hearing loss is due to preventable causes. Untreated ear infections and unaddressed hearing loss cost around $ 750 billion annually. 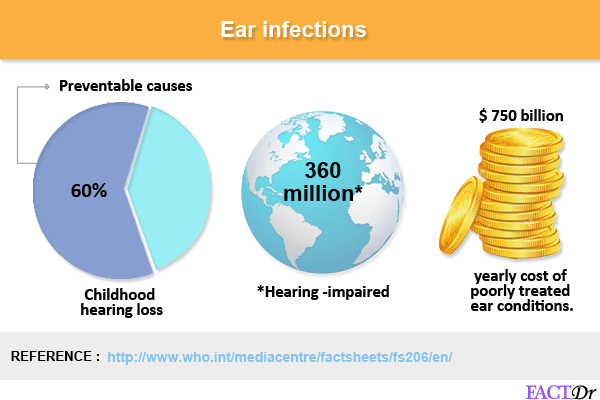 Ear infections are most characterized by persistent pain in the ear and sticky discharge secreting from the ears. Ear infections can be a result of bacterial or viral infections (cytomegalovirus or streptococcus) or environmental pollutants.

Excess ear wax accumulation, aging, and anatomical defects in the ear are also few of the common causes. These may also arise as a result of existing diseases such as meningitis or encephalitis (CNS conditions).

Did you know that almost 100% of adults have dental caries? Or that roughly 1/3rd of the aged demography doesn’t possess natural teeth?

Gum diseases or periodontal diseases occur when your gums become inflamed due to microbial growth. The most common cause is food sticking in gum pockets which provides an ideal breeding ground for bacteria to grow and thrive.

Gingivitis, periodontitis, necrotizing ulcerative periodontal disease – these are some of the most widespread and toxic gum inflammations. 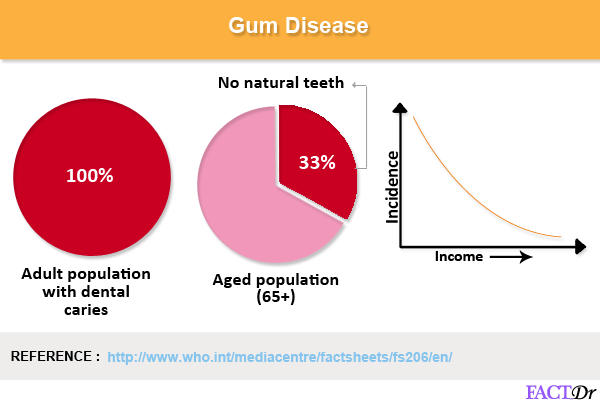 The fact that advanced gum infections and systemic diseases such as diabetes and cardiac condition are so closely linked puts oral diseases at high priority. It is also noted that oral diseases have a higher prevalence in low-income groups and amongst demography with lower literacy rates.

Hyperlipidemia or the condition of raised cholesterol levels is a matter of global concern.

Firstly because it automatically results in a high risk of cardiac illness.

And secondly, it is also linked with other chronic illnesses such as obesity, diabetes, and liver damage. As per WHO, 1/3rd of all cases of ischemic heart diseases ( #1 killer of human beings ) are brought on due to high cholesterol levels. 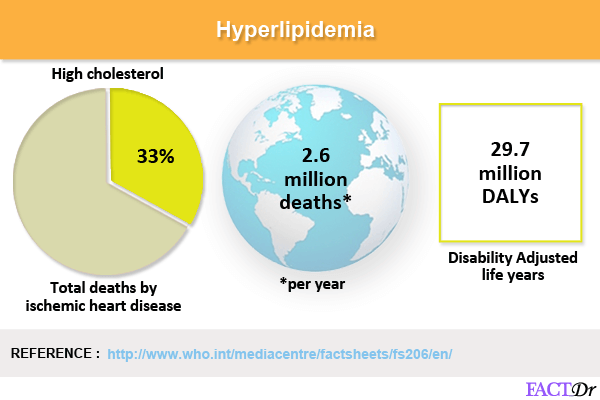 This condition, though present globally, is most prevalent among developed nations (high-income countries). NCDs or non-communicable diseases such as stroke, heart diseases, diabetes, obesity, and even cancer – high blood cholesterol plays a critical role in the onset of each.  It contributes to 29.7 million DALYs (disability-adjusted life years).

Obesity is one of the most rampant and chronic diseases of the current age.

Unhealthy dietary and lifestyle choices are the number one reason why there are more than 650 million obese people across the globe. This is roughly 10% of the entire global population.

1 out of every 3 Americans comes under the obese category. Obesity is not only widespread in high-income countries but is also gradually spreading to low and middle-income countries. 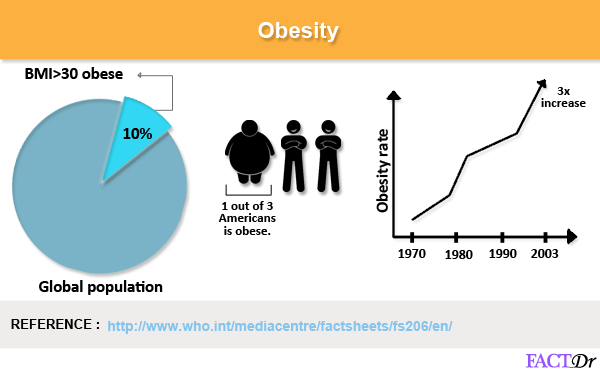 Obesity is at the crux of cardiovascular diseases, diabetes, and even cancer.

The global obesity rates have tripled in the past 40 years.  There are over 41 million children (under the age of 5) worldwide who are either obese or overweight.

This predisposes them to a higher risk of systemic and chronic diseases. Obesity can be largely preventable by following healthy dietary and lifestyle practices.  Globally, higher BMI (overweight and obesity) causes more deaths than malnutrition.

Hypertension or high blood pressure is a global pandemic.

Just like high cholesterol, elevated blood pressure is also responsible for the onset of several life-threatening chronic diseases such as heart diseases, stroke, and even kidney failure. Its prevalence is high in low and middle countries where people don’t have adequate access to sophisticated healthcare systems. 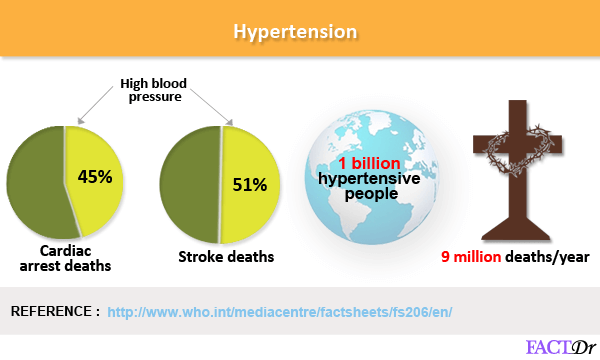 Health complications caused as a result of elevated blood pressure result in more than 9 million deaths worldwide. 45% of all deaths due to cardiac arrest and 51% of stroke-related fatalities can be attributed to high blood pressure.

As per WHO, there are almost a billion people on the planet who have high blood pressure. Since the symptoms of this life-threatening condition are not evidently observed in patients this disease is also known as a silent killer.

Musculoskeletal diseases are the second most leading cause of disability worldwide.

There are more than 150 conditions that come under this category; the most common ones being arthritis and back pain. Arthritis is a condition that fundamentally describes joint inflammation.

This inflammation manifests in the form of pain and stiffness in joints followed by swelling. It can also lead to permanent joint damage too. 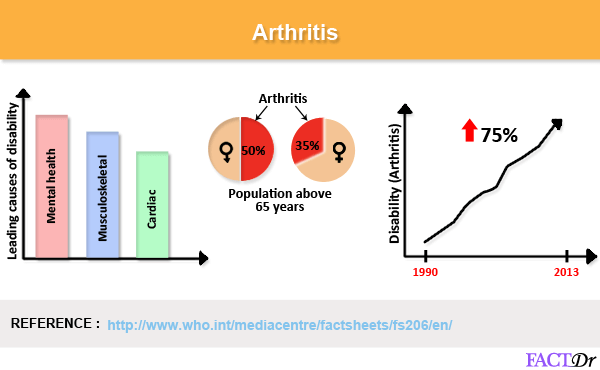 There are more than 100 different variants of this disease. This condition is more common among the aging demography – around 50% of men and 33% of women above the age of 65 have some form of arthritis (USA).

Studies indicate that the disability caused by arthritis – osteoarthritis to be precise has increased by 75% between the years 1990 and 2013.

Many experts consider arthritis to be the “oldest crippling disease known to mankind”.

More than 300,000 children have also been diagnosed with arthritis which implies that this is no longer a disease limiting to the aging demography. This not only results in physical pain and fatigue but also has a deterring effect on the mental health of the patient.